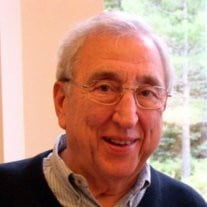 Our beloved Joseph Paul Henley, 86, passed away peacefully on Sunday, April 7, 2013 at Bortz Health Care in Traverse City, Michigan. He was born in Swanton, Ohio on August 27, 1926. He graduated with a Bachelors of Education degree from Ball State University in Muncie, Indiana. It is here that he met and married Annabelle Swihart, his wife of 65 years. In 1959, Joe became the first Branch Manager with Ford Motor Credit Company in Indianapolis, Indiana. He was the Vice President when he retired in 1991 after 32 years with Ford Motor Credit Company. Joe served in the Army during WWII, was a member of the Shriners, Masons, Scottish Rite and was a generous contributor of both time and money to his church and his community. Joe is survived by his loving wife, Annabelle, his two children; Gwen (Jim) McMullen and Judy Voorheis, five grandchildren; Brian McMullen, Rebecca McMullen, Alyssa Voorheis, David (Mallory Dansingburg) Voorheis and Abigail Voorheis. He was proud of his great grandson, Henley David Voorheis who was born on April 2, 2013. There are many people that were touched by this man. Anyone who knew Joe learned a lesson and the greatest lesson was that he cared most about others. Joe was preceded in death by his mother, Bertha Henley and sister, Linda Davis. A memorial service will be held on Saturday, April 13, 2013 at 3 P.M. at the Church in the Hills located at 6401 Shanty Creek Rd. in Bellaire, Michigan where Joe and Annabelle are members. The Rev. David Ramage will be officiating. A dinner will follow the service for those who would like to pay their respects to the family. In lieu of flowers, memorial donations may be given to Church in the Hills or the Shriners Hospitals for Children at www.shrinershospitalsforchildren.org

Our beloved Joseph Paul Henley, 86, passed away peacefully on Sunday, April 7, 2013 at Bortz Health Care in Traverse City, Michigan. He was born in Swanton, Ohio on August 27, 1926. He graduated with a Bachelors of Education degree from... View Obituary & Service Information

The family of Joseph Paul Henley created this Life Tributes page to make it easy to share your memories.

Our beloved Joseph Paul Henley, 86, passed away peacefully on...