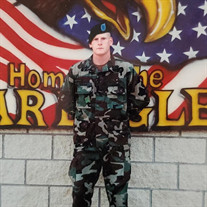 Joshua Ryan Kuchmuk, 40, of Traverse City, passed away June 19, 2021 at the University of Michigan Hospital after fighting a long painful battle with endocarditis and renal disease. His strength, determination and will power to overcome his illness for the last 6 months has finally come to an end and now he can rest. Joshua lost his younger brother USAF Captain Benjamin Kuchmuk April 3rd and his drive to fight with everything he had came from the will Benjamin had to survive. Joshua was an avid Civil War, WWI and WWII re-enactor always traveling to Gettysburg, and other battlefields, to not only be a part of living history, but also was an extra in many movies. In high school Josh used to work side by side with history teachers during time periods he was most familiar with and help instruct students by bringing uniforms and era items to show what the troops had to carry and wear. He loved history and knew an amazing amount. You might say he truly had an old soul. Joshua was a PFC in the US Army Military Police and was heading to Iraq when the physicians told him his back had too much damage from horseback riding and rodeos and they couldn’t clear him to fight. He was devastated as his whole life revolved around being a soldier honoring and protecting his country like his grandfather did during WWII and Korea. Both Joshua’s grandmother, Mary, and Grandfather, Robert (Sarge), were active in the military. Mary was a Captain in the Woman’s Army Air Corp and Robert was a Master Sergeant in the US Army accumulating over 40 years total serving our country. In Joshua’s final weeks of his life he spoke these words to his mother, “If my illness goes south on me mom, please know I’ve lived a happy fulfilled life and I regret nothing”. His disease did eventually take him but his smile, spirit, and legacy live on. Thank you Lord for giving us 40 years of Joshua. Surviving are mother Mary Reid (Dean), father David (Susan Monty), brother Corey Robert, sister Tricia (Mike) Fraser, and sister-in-law Emily Kuchmuk with his 2 nephews Maximus and Augustus. A time of gathering will take place Friday July 2, 2021 from 1:30-2:30pm at the Reynolds Jonkhoff Funeral Home. The service will begin at 2:30pm. In lieu of flowers, those wishing an expression of sympathy may choose to contribute to the Grand Traverse County Department of Veterans Affairs; designated to Homeless Veterans Fund. 2650 LaFrainer Road, Traverse City, MI 49686

Joshua Ryan Kuchmuk, 40, of Traverse City, passed away June 19, 2021 at the University of Michigan Hospital after fighting a long painful battle with endocarditis and renal disease. His strength, determination and will power to overcome his... View Obituary & Service Information

The family of Joshua Kuchmuk created this Life Tributes page to make it easy to share your memories.