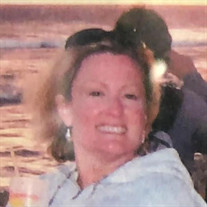 JOY ANN GILLETT Born November 24, 1957 – Died April 9, 2020 Joy Ann Gillett passed away on April 9, 2020 at Munson Hospice House in Traverse City, MI following a three-year battle with cancer. An Ann Arbor native, she had been a resident of Easton, PA before recently returning to Michigan. Joy was born in Pasadena, TX on November 24, 1957, the daughter of Jack and Dolly (Gardner) Gillett, who preceded her in death. She is survived by her brother, Dr. Ward (Mary) Gillett of Traverse City, nieces Katie Gillett (Jordan Ortiz) of Ann Arbor, MI, and Alexandra Gillett (Chris Baron) of Allegan, MI, uncle Leroy Gardner of Tecumseh, MI, aunt Doris Austin and cousin Amy (Lee) LeMaster of Lutz, FL and cousin Steve Austin of Columbus, OH. She was preceded in death by her parents, grandparents and uncle Robert Austin. Joy graduated from Ann Arbor Pioneer High School and then earned Bachelor of Science and Master of Science degrees from Michigan State University, and a Master of Business Administration degree from Rutgers University. Most of her professional career was spent in pharmaceutical research and marketing for Merck in New Jersey and Pennsylvania. After retirement, she continued living in Easton, PA, where she enjoyed time with friends, fellow Merck retirees and her very special Italian greyhound, Bella. The family is being served by the Reynold Jonkhoff Funeral Home in Traverse City. There is no service planned. A private family memorial will be held later this year. Her final resting place will be with her parents at Westside Methodist Church Memorial Garden in Ann Arbor. Memorial donations can be made to a charity of one’s choice.

The family of Joy Ann Gillett created this Life Tributes page to make it easy to share your memories.