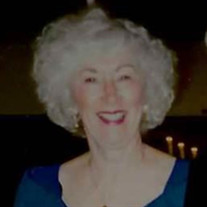 Joyce Ann (Thiry) Clark passed away peacefully on December 2, 2020. She is survived by her sons Kevin D. Clark and his wife Connie, Shaun M. Clark and his wife Debbie, and Kelly J. Clark and his wife Julie; grandchildren Kevin N Clark, Jacqueline Clark, Travis Clark, Tyler Clark, Kennedy Clark, Kaden Clark and Cooper Clark; great grandchildren Blake Bersano-Clark, Evan Haller-Clark, Mason Haller-Clark, Camden Haller-Clark, Collin Kozinski-Clark and Sofia Williams-Clark; and her sister Elsa See. Joyce was born in Detroit on February 7, 1935, just after the great depression. She was preceded in death by her parents Felix J Thiry and Elsa M Thiry, sisters Shirley Easson, Phillis Blaisdell, Carol Marzolf, Nancy Genewick-Manttari, and her brother David Thiry. Joyce was one of a kind and had a zest for life. She enjoyed the many summers spent on Marion/Power Island, while her husband Jack was the island caretaker. She was generous, warm, inclusive, had a beautiful heart, was fun-loving and always ready to share a book, meal, game or adventure, as was evident by her extensive circle of friends. We were blessed to have her as the matriarch of the family, and fondly recall her days as one of the ‘Jelly Sisters’ founders. A family gathering will take place at a later time. Kindly share thoughts and memories with Joyce’s family at www.reynolds-jonkhoff.com.

The family of Joyce Ann Clark created this Life Tributes page to make it easy to share your memories.