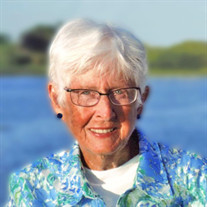 Joyce DeBruyn, 87, of Traverse City, passed into the presence of God on Sunday, November 17, 2019, with the family who adored her by her side. Joyce was born on March 4, 1932 in Reeman, Michigan the daughter of Herman and Anna (Cook) Deters. On July 28, 1950, she married Richard DeBruyn at which time they moved to Traverse City where they opened DeBruyn Concrete Products Co. She and Dick were charter members of Faith Reformed Church where they both served throughout their lives. Joyce is survived by her daughters Cheryl (Dale) Kloosterman, Joan (Randy) Burgess, Barbara (Mike) Aja; her grandchildren, Kelly (Kevin) DeBruyn, Kevin (Jennifer) Kloosterman, Amy (Gene) LaFave, Benjamin (Kristen) Burgess, Joseph (Gracie) Burgess, Christopher (Elle) Burgess, Jessica (Michael) Filicicchia and Nicholas (Sara) Aja, along with 14 great grandchildren. She is also survived by her brother-in-law Adrian DeBruyn and her sisters-in-law Ann Westfield and Roanne DeBruyn. Joyce was preceded in death by her husband Richard, daughter Patricia, parents Herman and Anna, sisters Doris, June, and Kathleen and brothers Howard, Gordon and Harvey. Joyce has left a legacy of love and faith. She came to know Jesus as her Lord and Savior as a young child. Joyce had the gift of hospitality and serving and spent much of her time entertaining those from her church, hosting pool parties and parasailing parties for family and countless friends. In her later years she always loved to make meals for her daughters. She had an unassuming and quiet strength and she loved and supported her family in many ways. Joyce and her family would like to express their appreciation and gratitude to Dr. Lee Warnaar, the staff at the Heart Clinic and Munson's Hospice House who have touched our lives in such precious and profound ways. Her life and battle is now over but living in her Father's glory will be forever. Visitation for Joyce will take place Wednesday evening, November 20 from 5 until 7 p.m. at the Reynolds-Jonkhoff Funeral Home. The funeral service will begin at 11 a.m. Thursday, November 21 at Faith Reformed Church with visitation one hour prior to the service. Joyce's son-in-law, Randy Burgess will officiate at the funeral service. Burial will be in Oakwood Cemetery. For those desiring, the family has asked that Joyce be remembered through memorial gifts to Faith Reformed Church Missions, 1139 E. Front St., Traverse City, MI 49686 or to The Salvation Army, P. O. Box 5228, Traverse City, MI 49696-5228.

Joyce DeBruyn, 87, of Traverse City, passed into the presence of God on Sunday, November 17, 2019, with the family who adored her by her side. Joyce was born on March 4, 1932 in Reeman, Michigan the daughter of Herman and Anna (Cook) Deters.... View Obituary & Service Information

The family of Joyce Marie DeBruyn created this Life Tributes page to make it easy to share your memories.

Joyce DeBruyn, 87, of Traverse City, passed into the presence...