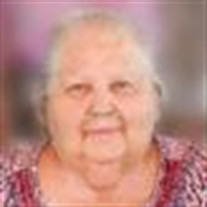 Joyce Anne Groesser passed at her home surrounded by loving family on October 31, 2019. Joyce was 81. Joyce Anne Conine was born on October 1, 1938 to Walter and Alice (Porter) Conine. She grew up in Leelanau County and graduated from Traverse City High School. On October 6, 1956 she married G. Richard Groesser at the First Christian Church, Traverse City. Joyce was a sweet, kind, non-judgmental person who was a “counselor” to many, who easily shared in their joys as well as their troubles. She came to know many people at the Stop ‘N Shop, the store that her and Dick owned and operated for over 20 years. Joyce loved to travel and was able to experience the Olympic Games in Atlanta, GA and visit Rome and Pompei, Italy with her daughter Cari. Camping was also another favorite hobby. Joyce was gifted as a seamstress who loved to sew and knit, especially for her grandchildren and great-grandchildren. Among other passions, Joyce was an avid euchre player (often “elbow marking”), played bingo at the senior center, and played bunko with a special group of ladies for over 40 years. She was also an active leader with the Leelanau County 4-H, something she thoroughly enjoyed. Joyce is forever loved by her children: Mart Groesser, Jennie (Brent) Parker, Angie (David) Rongey-Grix, and Cari Groesser; grandchildren: Jeffrey (Anna) Parker, Donald (Emilie) Rongey, Jason (Jayme) Parker, Lynn (Robert) Schmuker, Paul (Andrea) Rongey, and Hannah Parker; great-grandchildren: Meredith, Brayden, Jack, Addison, Emmaline, Joseph, and soon-to-be baby boy Parker; sister Carol Booth, brother and sister in law Terry and Nancy Groesser, brother in law Bruce Fayerweather, many nieces and nephews, many friends and family, and special friend Pam. She is preceded in death by her parents, husband, son Michael, sisters Mary Fayerweather and Susanne Reicha, brother Gordon Conine, and brother in law Edward Booth. Donations in Joyce’s memory may be directed to the Leelanau County 4-H. Visitation will be at the Reynolds-Jonkhoff Funeral Home on Monday, November 4 from 4-7 p.m. A celebration of life will follow at 11 a.m. on Tuesday, November 5 at the funeral home. Mark Belanger to officiate. Additional visitation will begin at 10 a.m. until the time of service. Joyce will be laid to rest at Keswick Maple Grove Cemetery - Suttons Bay. Joyce and her family are in the care of the Reynolds-Jonkhoff Funeral and Cremation Services; www.reynolds-jonkhoff.com.

Joyce Anne Groesser passed at her home surrounded by loving family on October 31, 2019. Joyce was 81. Joyce Anne Conine was born on October 1, 1938 to Walter and Alice (Porter) Conine. She grew up in Leelanau County and graduated from Traverse... View Obituary & Service Information

The family of Joyce Anne Groesser created this Life Tributes page to make it easy to share your memories.