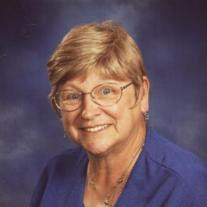 Judine F. Leavitt, 66, of Traverse City passed away after a battle with cancer Wednesday, January 16, 2013 at Munson Medical Center in Traverse City. Judine was born on April 23, 1946 to Royal and Angeline (Armbrust) Lackey in Newberry, MI. She used her degree in education from Northern Michigan University teaching the children of US military personnel in the Philippines, Germany, and Italy. Judine enjoyed the teaching as well as the chance to see so many places. She even took an interest in scuba diving taking her first lesson off the deck of a Destroyer. Judine earned her Masters in education and used her knowledge and talents as a private tutor in Traverse City. She was extremely caring and compassionate and was an advocate for many at-risk children. Judine had a passion for children and often worked in their favor with Friend of the Court or speaking to educate many about fetal alcohol syndrome. Judine was always giving of her talents but more often her time and her self, volunteering where she could including, Father Fred and St. Vincent DePaul or providing respite care for other parents. Judine was a faithful and active part of the parish at Christ the King Catholic Church in Acme. She will be remembered for her passion, drive and ability to put others first. Judine is survived by her children; Raymond (Cecilia) Leavitt of Traverse City, and Rita (Donald) Erickson of Grawn, her mother, Angeline of Marquette, her sister; Rose (Steve) Gerlach of Saline, three brothers; Robert (Mary Jo) Lackey of Marquette, Gerald (Nancy) Lackey of Colorado Springs, CO, Ronald (Deborah) Lackey of Gaylord, and one sister-in-law Carol Lackey, four grandchildren, Anna Marie, Pearl, and Henry, with grandson Raymond expected very soon, as well as many other loving family members and friends. Judine was preceded in death by her father, Royal F. Lackey and one brother, William Lackey. A memorial Mass will take place at 11:00 AM on Saturday, January 19, 2013 at the Christ The King Catholic Church, with visitation one hour prior to the service. The Rev. Raymond Cotter will officiate. Grave-side committal services will be held at Oakwood Catholic Diocesan Cemetery in the spring. Memorial contributions may be directed to Father Fred Foundation, Christ the King Catholic Church or a worthy cause helping others of your choice.

Judine F. Leavitt, 66, of Traverse City passed away after a battle with cancer Wednesday, January 16, 2013 at Munson Medical Center in Traverse City. Judine was born on April 23, 1946 to Royal and Angeline (Armbrust) Lackey in Newberry, MI. She... View Obituary & Service Information

The family of Judine F. Leavitt created this Life Tributes page to make it easy to share your memories.

Judine F. Leavitt, 66, of Traverse City passed away after a battle...