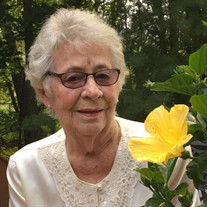 Judith Anne (Lardie) Freundl, age 84, passed away March 25, 2022 in Traverse City. A native of Old Mission Peninsula, Judith was born on December 17, 1937 to the late Oakley and Jill (Emory) Lardie. Judith graduated from St. Francis High School in 1955 and went on to attend the Mercy School of Nursing. Her first nursing job was at Mercy Hospital in Jackson, MI. After which, her move to Traverse City gave her an opportunity to work at Munson Medical Center and then Traverse City Regional Psychiatric Hospital. She retired from the American Red Cross and the State of Michigan Department of Mental Health. Judith was an active parishioner at St. Joseph Catholic Church for her entire life. Her family donated the land on which the church was originally built. She volunteered at St. Vincent de Paul and the Father Fred Foundation, was a cub scout leader and longtime chaperone for the St. Francis Band and sixth grade trips at Old Mission Peninsula School. Judith loved watching sports, especially football. She will be lovingly remembered as a trusted confidante and encourager in times of trouble with boundless hope. Judith is survived by her children, Larry (Joanne) Freundl, Lynda Freundl, Rick Freundl, and Julie (Dan) Muehling; sixteen grandchildren; thirteen great-grandchildren; brothers Ken and Chuck Lardie; step-niece, Jill Hayes; step-nephews, Jack and Jeff Lardie; and special friend, Father James Bearss. In addition to her parents, she was preceded in death by her sister, Nancy Uithol; step-sister, Eileen Lardie; grandson, Shaun Raymond Stalcup; and granddaughter, Judianna Katherine Freundl. Visitation for Judith will take place on Thursday March 31, 2022 from 5-7pm at St. Joseph Catholic Church with a rosary at 7:00pm. The funeral mass will be Friday April 1, 2022 at 11:00am with visitation from 10am until the time of service at St. Joseph with Father James Beers officiating. Burial will follow at St. Joseph Cemetery. For those wishing to give a gift in memory of Judith, contributions may be directed to the Father Fred Foundation. Funeral arrangements have been entrusted to the Reynolds-Jonkhoff Funeral Home and Cremation Services.

The family of Judith Freundl created this Life Tributes page to make it easy to share your memories.