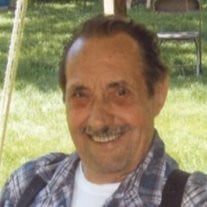 Judson Anthony Ammons, 82, of Leelanau County passed away Thursday, May 2, 2013 at his home. Judson was born on August 31, 1930 in Fort Wayne, IN to the late Allen and Gertrude (Seburn) Ammons. He proudly and honorably served our country with the United States Army in Korea. He was a member of the KWVA, Korean War Veterans. Judson moved to Northern Michigan and began a long career with Michigan Bell. Eventually his work was with AT&T as a PBX repairman, retiring in 1986 with over thirty years of service. From there Jud went out on his own running his own business for ten years serving large commercial accounts such as NMC and Interlochen Arts Academy. He was a proud and longtime supporter of Northwestern Michigan College. Jud was also a member of the Rounds Breakfast Club where he could socialize and enjoy the company of friends over a good meal. He enjoyed the time in the garden and often spent time picking strawberries and blueberries or any other vegetable or fruit in season. Spending time with his family brought him great joy and he will be deeply missed. Surviving Judson are his children, Jean (Dan) Willette, Allen (Margo) Ammons, Mary (Randy) Goodman, Pamela (Nick) Maize, Erin (Barton) Ammons, grandchildren, David, Alex (Tara), Jesse, Andrew, William, Josh (JingYi), Randy (Tammy), Cassie (Chris) and Kirstie (Jeff), seven great-grandchildren, his siblings, Lois Geiwitz, Robert "John" Ammons, Dorothy (Richard) Klug, Patricia Sabo and many other loving family members and friends. Judson is preceded in death by his daughter, Patricia Mayse, his parents, brothers, Jesse and Richard "Eddie" Ammons and a sister, Mary Beldon. Visitation for friends and family will take place from 5 to 7 P.M. on Sunday, May 5, 2013 at the Reynolds-Jonkhoff Funeral Home. Funeral services will take place on Monday, May 6, 2013 at 11A.M. also at the funeral home. Memorial contributions may be directed to the American Cancer Society or the Cherryland Humane Society Grave-side committal services will be held at Kasson Township Cemetery at a later date.

Judson Anthony Ammons, 82, of Leelanau County passed away Thursday, May 2, 2013 at his home. Judson was born on August 31, 1930 in Fort Wayne, IN to the late Allen and Gertrude (Seburn) Ammons. He proudly and honorably served our country... View Obituary & Service Information

The family of Judson A. Ammons created this Life Tributes page to make it easy to share your memories.