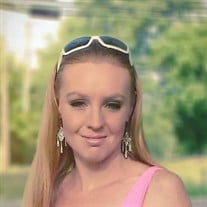 Julie Ann Shafer-Frankeberger, 45, passed away unexpectedly after a hemorrhage of the brain. Even though traumatic, she passed on her terms with her family surrounding her and embracing her last moments. She selflessly touched the lives of so many others as a mother, wife, sister, Aunt, Daughter, Friend and Gift of Life Donor. Julie was born October 20, 1976 in Mount Clemens MI to Jim Pinkley and Kathleen Otto. She grew up in many areas of Michigan and enjoyed making memories with her nine siblings in every location. This undoubtedly gave Julie the taste for wanting to have a gypsy lifestyle. One of the best memories for the whole family is when Jim would load them into the pick-up truck and take them to Silver Lake to swim and then for ice cream. In 1994 she married her first husband Charles Shafer in Traverse City and together they had five sons. In August of 2020 she married her husband, Robert Frankeberger. Her primary role was to be a mother and she took great joy in raising her 5 sons. They were her life. On the side, she dabbled as an entrepreneur opening antique shops, pop up retail stands and booths at flea markets. She could make use of anything around her. She was affectionately nicknamed “garage sale” all in part to her sweet talking and deal making abilities. You could give her a dollar and as her husband would say “she would fill the truck!”. Because of her gypsy at heart lifestyle, she traveled all over the Country. She truly lived wherever she was from Montana to Michigan and everywhere in between. She loved camping, music and being by the water. Having fires and a time to gather with her family and sing and dance was a highlight not only for her but for them too. She was the life of the party and the rock of her entire family. She would take you as you were with no judgement. She could bring a smile to anybody with no effort. She had a close bond with her sisters and created what they call the “Butterfly Club”. A butterfly tattoo was the only requirement to join. She had code words and quirky sayings. She is a soul that will dearly be missed. She is survived by her husband Robert Frankeberger (King Kong), her sons; Austin Widerner, Michael Shafer (Jeannie Phillips), Zacquary Widener, Charlie Shafer (Holly Merchant), Jacob Shafer (Taylor Hood) and the father of her children Charles Shafer. She is also survived by grandchildren; Lilly Klingelsmith and Violet Widener as well as her parents, siblings; Janice Vipond, Jackie Widener (Jimmy Browe), Jeffery (Silvia) Pinkley and half siblings Trina Pinkley, Diana Pinkley, Lisa Pinley (Victoria Rose) Jennifer Pinkley and Jay Pinkley. Additionaly her nieces and nephews; Brittany (Chance Gribble), Nicholas, Autumn, Steven and Skylar. She is preceded in death by her grandparents Jack and Muriel Widener her uncle Richard Widener, her aunts Dorothy Erwin and Mary Otto as well as her step-father Ralph Otto. A visitation will take place on Saturday March 12 ,2022 from 2-3pm at the Reynolds Jonkhoff Funeral Home. A time of sharing memories and stories will begin at 3:00pm also at the funeral home. (305 Sixth Street, Traverse City, MI 49684). Memorial contributions in Julie’s honor may be made to the Father Fred Foundation. A big thank you to Megen and the entire team at Reynolds Jonkhoff Funeral Home for being so compassionate and caring with the family during these times.

Julie Ann Shafer-Frankeberger, 45, passed away unexpectedly after a hemorrhage of the brain. Even though traumatic, she passed on her terms with her family surrounding her and embracing her last moments. She selflessly touched the lives of so... View Obituary & Service Information

The family of Julie Ann Shafer-Frankeberger created this Life Tributes page to make it easy to share your memories.