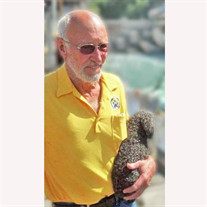 Julius LeRoy Bugai, Jr., 79, a lifelong resident of Cedar, passed away Saturday, August 10, 2019 at his home in Cedar. Julius was born on Sunday, April 28, 1940 to the late Helen Marguerite (Kroupa) and Julius Leonard Bugai in Traverse City. He attended and graduated from Traverse City Schools. He worked as a welder, and later worked in construction and was known as an amazing builder. In recent years, Julius was a custom butcher, which he thoroughly enjoyed. Being one who preferred to be in the out of doors, Julius enjoyed gardening, fishing and hunting. He enjoyed Cheyenne cigars and was an avid fan of chocolate milk, chocolate cake with chocolate frosting, and maybe even some chocolate syrup over the top! His family will always remember him as an extremely kind man with a huge heart. Julius is survived by his best friend and buddy, Squirt, his children, Susan (Robert) Hall of Battle Creek, Martin Bugai of Oshkosh, WI, Yvonne Bugai of Traverse City, Karen Hoogerhyde of Sparta and Kathleen (Chad) Braden of Grand Ledge; his grandchildren, Darian Weaver, Margaret Hall, Sophia Bugai, Austin Bugai-Edwards, Kenneth Hoogerhyde, Jarrett Hoogerhyde, Adrienne Holmes, Ellery Holmes, Hailey Braden and Jax Braden and great grandchildren Eli Weaver and Adaline Weaver. Julius is also survived by his siblings, Carolyn (Eugene) Lautner, Donald (Susan) Bugai, Linda (Louie) Walters and Nancy Miles, along with many nieces, nephews and grand nieces and nephews. In addition to his parents, he was preceded in death by a brother in law, John Miles. A time to visit and gather with Julius' family will take place at The Reynolds-Jonkhoff Funeral Home from 11 a.m. until 2 p.m. Sunday, August 18, with a time of sharing at 1 p.m. Following the visitation, friends and family are invited to the home for a continued time of celebrating Julius' life. Because Julius enjoyed dogs and the out of doors, memorial contributions in his memory may be directed to The Cherryland Humane Society, 1750 Ahlberg Rd., Traverse City, MI 49696 (www.cherrylandhumane.org) or to the National Wildlife Federation, 11100 Wildlife Center Dr., Reston, VA 20190 (www.nwf.org).

The family of Julius LeRoy Bugai created this Life Tributes page to make it easy to share your memories.