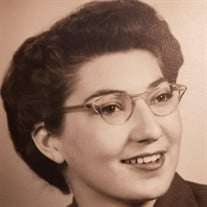 June Cecilia Hansen, age 92, passed away on September 17 at the Hospice House after a lengthy illness. June was born on June 26th,1929, in Grand Rapids Michigan. She was the youngest daughter of Goldie (Gray) and Cecil Lionel Hippensteel. On October 6, 1955, she was united in marriage with Paul Joseph Hansen in Traverse City Michigan. He preceded her in death in 2015 after 60 years of marriage. June grew up in Benzie County and graduated from Benzie Central Highschool in 1947. She went on to attend college and graduated with a nursing degree. June was employed by the State of Michigan as a Nurse for 19 years where she worked in a supervisory capacity at the former Traverse City Regional Psychiatric Hospital. After nearly 20 years of employment, she left her nursing career for what she considered her most important job, being a mom. June also found joy in teaching Sunday School, participating in Children's Youth Crusade, and teaching Bible School at Bayview Wesleyan Church for many years. She was room-mother for her children when they were in elementary school and continued to support them all through their college years. She was elected Blair Township Clerk from 1980-1984 and was instrumental in procuring grants and funding to begin the Blair Township Park. June enjoyed over 30 years RV traveling with her family. She also enjoyed spending winters in Florida with her husband until health issues forced them to remain closer to home. She loved to knit and crochet and would donate many hats to the cancer center. June was also very generous in donating her time and talents to numerous mission projects throughout the years. At 84, she taught herself how to use a computer (with the occasional help of her two grandsons) and kept busy documenting her memories and writing and sharing stories and poetry about life during the Great Depression. Most importantly, June loved the Lord and her family and was never happier than when spending time with them. June is survived by her daughter Kym (Daniel) Hansen-Duell, her son Kory (Meghan) Hansen, and her beloved grandchildren, Jake Joseph and Luke Daniel Duell, Hayden Paul, Culley Hathaway, Hattie Cecelia, and Clara Frances Hansen, all of Traverse City. She is also survived by sisters-in-law, Doris Hansen and Marilyn O’Neil and many nieces and nephews. She was preceded in death by her parents, husband Paul, an infant sister and brother, sisters Mary Thompson, Wilma Deeren, Virginia Smith, brother C.L. Hippensteel, sisters-in-law Pat Hippensteel, Margaret Kolarik, Dottie, Garnet, Marylea and Doris Hansen, Lillian Hartzell, brothers-in-law John T. Smith, Carl Deeren, George Brownell, William Hartzell, Armond, Vince, Ted, and Robert Hansen. June’s family is grateful for the compassionate care she received in the last few months of her life to include care from her friends at the Pavilions, the Cancer Center, the health care staff at her physician’s offices, Hospice House and Munson Medical Center during her recent stay. Services will be held at Reynolds-Jonkhoff Funeral home Friday, September 24, 11:00 AM. Visitation, Thursday, September 23rd from 5-7 PM, and one hour before the service on Friday morning. Interment will follow in Grand Traverse Memorial Gardens. Memorials may be directed to Pine Rest Christian Mental Health Service Traverse City Clinic, 1050 Silver Drive, Traverse City 49684 or to Pavilion Foundation, 1000 Pavilion Circle, Traverse City, Michigan 49684.

June Cecilia Hansen, age 92, passed away on September 17 at the Hospice House after a lengthy illness. June was born on June 26th,1929, in Grand Rapids Michigan. She was the youngest daughter of Goldie (Gray) and Cecil Lionel Hippensteel. On... View Obituary & Service Information

The family of June Hansen created this Life Tributes page to make it easy to share your memories.