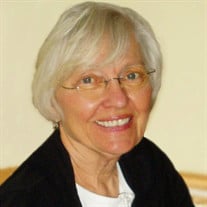 Karen Ann Mudgett, 77 of Traverse City, passed away quietly in her home on December 9, 2019. Karen was born December 14, 1941 in Freeland, MI to parents Ludwig “Louie” and Anna (Pacek) Rau. Karen was a Registered Nurse who received her nursing degree from Saginaw General Hospital School of Nursing in 1962. She was president of her graduating class and received the Aleda E. Lutz award of merit at graduation. She kept in touch with several of her nursing school classmates over the years even though some lived in different states. She was also part of the Nurses’ Health Study, one of the largest investigations into the risk factors for major chronic diseases ever conducted. After becoming an R.N., Karen worked at Midland Hospital where she met her husband Jim, who was an Intern there. They were married in Midland on July 2, 1966. Because of her husband’s service in the Air Force, they were stationed in Cape Cod and Santa Barbara where Karen also worked as a nurse. After raising her two daughters, Karen went back to work teaching nursing at TBA Career Tech Center, sharing her experience and helping launch local youth in successful careers in healthcare. After she retired from TBA, she worked until 2013 as a Clinical Skills Observer for the state of Michigan to help certify Nurse Assistants. In the late 1960s, Jim and Karen moved to Beulah and then Charlevoix for Jim’s medical school residency. They moved to Traverse City in 1970. In 1988, Karen and Jim bought a summer cottage on the south end of Lake Leelanau. Over the course of many years, Karen transformed the grounds of the property. She was an avid home gardener with an enviable green thumb. She loved tending vegetables and grew a rainbow of perennials and annuals. Anyone who visited in the summer was struck by the beauty of her hard work. The setting was so lovely, that her daughter Jayne was married on the lawn in 1998. Karen’s other hobbies included yoga, knitting and the thrill of the hunt for a good shopping bargain. In 2008, on the site of the old cottage, Karen built her dream home decorated with a water-inspired palette of greens and blues. She enjoyed the peacefulness and views of the lake from her new house. Karen also loved dogs. The family got their first Springer Spaniel Daisy in 1989. Karen was thrilled when Daisy gave birth to nine puppies. They ended up keeping one of the puppies Dan, who lived happily with his human and canine mom for many years. Karen was also a mom to her Yorkie Max and her spunky new puppy Sweetie, a Maltipoo. Always a caregiver, Karen set a good example for her family who cared for her when she was in Hospice. When Anne was in a car accident in 2002, Karen and Jim spent the better part of the summer caring for her, moving into family housing next to the hospital in Denver, Colorado. She also came out to Colorado to assist for several weeks after each of her grandchildren were born. Karen is survived by her daughters Anne (Scott Furgueson) Mudgett of Steamboat Springs, CO and Jayne (Paul) Weiss of Ft. Collins, CO; grandchildren Collin Mudgett-Furgueson and Ava and Nate Weiss; her puppy Sweetie; and other extended family and friends. Karen was predeceased by her parents; husband Dr. James I. Mudgett; sisters Patricia Henige and Maxine Hensler. A memorial service honoring Karen will take place 11AM, Friday, December 13, 2019 at Reynolds-Jonkhoff Funeral Home, 305 Sixth Street, Traverse City, MI 49684. Visitation will begin at 10AM and continue until the time of service. Memorials may be directed to Grand Traverse Regional Land Conservancy, 3860 N. Long Lake RD, Suite D, Traverse City, MI 49684 or to Leelanau Conservancy, 105 North First Street, Leland, MI 49654. Reynolds-Jonkhoff Funeral Home and Cremation services is caring for Karen and her family.

The family of Karen Ann Mudgett created this Life Tributes page to make it easy to share your memories.

Karen Ann Mudgett, 77 of Traverse City, passed away quietly in...