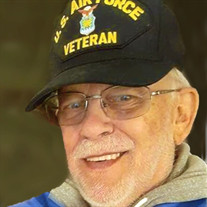 Karl Oscar Anderson, 77, of Traverse City (formerly Ludington) died Sept. 7, 2019. He was born January 25, 1942 in Ludington, the son of John and Cornelia (Classen) Anderson. Karl is survived by his loving wife Barbara (McDonald); daughters Brie (Jacob Jones) Anderson and Chelsi (Jorge) Cruz; sons Kris (Margaret) and Kim (Ginger) Shoemate; 13 grandchildren; 2 great-grandchildren; and several nieces and nephews. He was a devoted husband and father. His family meant the world to him. He would drop everything to be there for every school event from videotaping band and dance performances to hiding behind trees at golf matches because he didn’t want his daughters to know he was there. He loved going to Titan football games, especially when they played Central. The Patriot game was by far his favorite game of the season, he would talk about it all year long. He believed wholeheartedly that the Arts belonged in the school setting and supported it staying there every step of the way. He was an avid golfer throughout his life and truly missed it over the last few years, reminiscing of all the great times and different places he played. He loved airplanes. He would convince his wife to go sit at the airport for hours at a time just to see the planes take off and land. He was beyond proud to be a Veteran, a Vietnam Veteran. He loved the service and his country. His time in the Army and Airforce were where so many of his great stories came from. He spent time working at the Pentagon in Washington D.C. before moving back to Michigan. The Blue Angels were such a big part of him. He would tell anyone who would listen all about them; how they came to Traverse City for Cherry Festival and he’d try to convince them to come watch them fly. He was predeceased by his parents; sisters Rosemary (Ed) Lorenz, Ruth (Stewart) Swanson and Donna (Herb) Vorak. A memorial service and military honors will take place Friday, Sept. 13, 2019, 1 PM, in the chapel at Central United Methodist Church, 222 Cass St., Traverse City, MI 49684. Reverend Dale Ostema will serve as officiant. Friends and family will be received from 12 PM until the time of service. In lieu of flowers memorials in Karl’s honor may be left to Central United Methodist Church, Traverse City West Senior High Music Boosters, 412 Webster St., Traverse City, MI 49686, or to Grand Traverse Area Veterans Coalition, PO Box 5315, Traverse City, MI 49696. Karl and his family are being cared for by Reynolds-Jonkhoff Funeral Home and Cremation Services.

The family of Karl Oscar Anderson created this Life Tributes page to make it easy to share your memories.