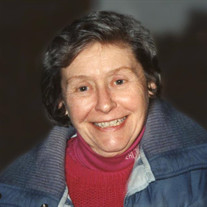 Kathleen Craig, 88, of Traverse City passed away December 19, 2015 in Traverse City. Kathleen Mae (Geerlings) Craig was the first child born to Bertha (Schweissinger) and her husband, Dr. Lambert J. Geerlings, in Fremont, Newaygo county, Michigan on Sunday, October 2, 1927. Her father was a physician and a surgeon and her mother a nurse. Kathleen was christened at the First Christian Reformed Church of Fremont, Michigan. She adored her “Daddy” and it was one of her first spoken words on which she relied upon throughout her life. After graduating from Fremont High School in 1945, Katie earned her Bachelor of Arts degree in Education from Alma College in 1949. She also attended Michigan State University in 1952, prior to her marriage. After teaching in Ionia, she became the chair of the English Department of Troy High School. Kathleen married James Alexander Craig, Jr. on August 28, 1965 in Fremont. Following their marriage she and Jim moved to Traverse City where they lived the remainder of their lives. One of Katie’s interests was through her membership to the P.E.O. Sisterhood, an international women's organization with a primary focus on providing educational opportunities for female students worldwide. Katie belonged to the Elk Rapids EB chapter where she was an active member. Also, Katie worked at Millikens where she made many friends. Swimming was also an interest and an outlet, first as a swimming teacher and later she enjoyed water aerobics at the Y.M.C.A. next door to her apartment at the Village of Bay Ridge. There she became dear friends with Cynthia Russell and her dog Cesar who would nap with Katie. Jim and Katie shared their lives together lovingly, especially enjoying skiing. They were dog lovers who walked their dogs, handed out treats and loving having their companionship. In 2005 Jim preceded her in death, leaving Katie and their dog, Walter. The Craigs were active members of the Presbyterian Church of Traverse City beginning in 1969. Katie was a member of the Lydia Circle and the Voyagers. Katie is survived by the following Jewell family members: niece, Susan Jewell Duplissis (John) and her children, nephew Jordan Fairbanks of Grand Rapids and nephew Thomas Jewell (Carri) of Gulf Breeze, Florida, great-nephew Trevor Jewell of Charlotte, North Carolina and great-nephew Ross Jewell of Wisconsin Rapids, Wisconsin. Also Katie’s brother-in-law, Robert Jewell and his wife Louise are a part of her family. The Craig family members are: sister-in-law Janet Craig Azar and her husband Hormoz of Norfolk, Virginia and two nieces, Taraneh Azar of Rye, New Hampshire and Afsaneh Ambrose of Vienna, Virginia. There will be a memorial service celebrating Katie’s life at the Presbyterian Church of Traverse City, 701 Westminster, at 11:00 am on April 28, 2016 followed by burial in the Presbyterian Church Prayer Garden. Memorial contributions may be directed to the Presbyterian Church of Traverse City. The family is being served by the Reynolds-Jonkhoff Funeral Home. Please visit www.reynolds-jonkhoff.com to share your memories of Katie and to sign her online guestbook.

The family of Kathleen Craig created this Life Tributes page to make it easy to share your memories.