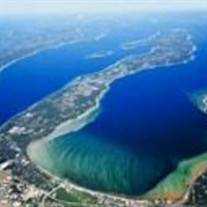 Kathleen “Kay” Dowswell, 98, of Traverse City, passed away on August 5, 2021 as she had always wished for, peace in her heart and watching the Grand Traverse Bay. Kay was born in Amherstburg, Canada on November 12, 1922 to the late Lloyd and Winifred (Kemp) Pettypiece. She was one of three children including her brother Robert and sister Margaret “Peggy” whom she now joins in a joyous reunion. Additionally, she joins her parents and granddaughter Sarah. In her early 20’s she boarded a train from Canada to Detroit with goals and aspirations of all things possible. On one of the trains rides she was greeted with more then the ideals of a new beginning in America, but was given the hand of her forever love Albert "Ross" Dowswell. With a whirlwind courtship and a swift wedding, the two made the Detroit area their new home. An accomplished artist, with her wicked humor, her elegant ways and her kind disposition, Kay really was the complete package. She was an elementary teacher for a number of years and although this was her real profession, some would claim that her view of the bay and the way she would awe over it daily for 70 years was really her job. She loved swimming and was an avid reader never missing a new release of James Patterson. She truly loved people both young and old and provided gifts of love, support and conversation with each of them. Her smiles, kind words and thoughtful ways will be greatly missed. Kay is survived and missed dearly by her Children William (Renee) and Carol (Robert) Moss, grandchildren; Madison (Edward Narh), Griffin and Ryan (Jude) Brown, Eric (Kristy) Moss and Russell Moss, as well as great great grandchildren; Ava, Addyson, Aubrey, Abigale and Owen. She is also survived by many special friends both young and old. Please visit www.reynolds-jonkhoff.com to share your thoughts with the family. Per her wishes, cremation has taken place and she will be placed at the family cemetery in Canada. Kay and her family are being cared for by the Reynolds Jonkhoff Funeral Home.

The family of Kathleen "Kay" Dowswell created this Life Tributes page to make it easy to share your memories.

Kathleen “Kay” Dowswell, 98, of Traverse City, passed away on...