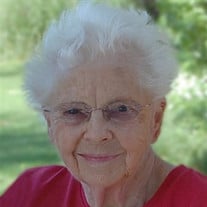 Traverse City - Kathleen "Katie" Kieren, 91, Traverse City, passed away peacefully at home on April 29, 2014, with her family by her side. Katie was born on July 19, 1922 in Venosta, Quebec to her parents the late Martin and Florence (Mullin) O'Dea. She grew up in Detroit and spent summers in Venosta. She graduated from St. Gregory High School in Detroit and attended Marygrove College. Katie married Roger Kieren in 1944 and together they raised their seven children in Grosse Pointe Woods, MI. Katie was a true bouquet of flowers who celebrated her Irish heritage and lived life to the fullest. She was a powerball of energy and a true inspiration to those who met her. Despite her many tragedies, Faith was her beacon; she attended mass nearly every day and she devoted herself to doing for others. Admired for her zest of life, she actively sought new experiences straight up until the end of her life. She was an explorer who embraced music, culture, heritage, and nature and she was always actively involved in her community. She and her husband were sailors and campers and took their seven children to nearly every National Park. Katie was a world traveler who stepped foot on every continent. In addition to the usual touring, she road elephants in Thailand and walked among penguins in Antarctica, She was also an excellent cook and her frequent dinner parties were known for their elegance. People will remember Katie as being a volunteer extraordinaire. In Detroit, she read for the blind for 14 years on public radio, lead a Bereavement Support Group, was a teacher for Breast Cancer Recovery Groups and delivered for Meals on Wheels. She was constantly involved with church activities including serving funeral luncheons and creating floral arrangements for the alters. In addition to her services at St. Francis Church, she was actively involved in wildflower rescues at Cranbrook House & Gardens and the Leelanau Nature Conservancy. She was a past president of the Charlevoix Garden Club. In honor of her husband, Roger, Katie decided to donate her land along the shores of Lake Susan near Charlevoix and started the "Kieren Nature Preserve" as part of the Little Traverse Conservancy. She recently "retired" from her volunteer work at the "Heritage Center" but continued to enjoy working at the Traverse City's Visitors Center. She was a master gardener who made spaces beautiful wherever she went. She passed out bulbs and perennials wherever she went and kept a lovely garden at her condo. She enjoyed teaching others and encouraged many to start their own gardens. She was an amazing example of thoughtfulness and resilience, always putting one foot in front of the other. Her family and extensive group of friends are richer for having known her. She has left a unique imprint on each of our lives. She is survived by daughter, Nadeen Kieren and husband, Thom Greene, Chicago; son, Paul Kieren and partner, Gil Whelden, Leland, MI; sister, Shirley Sloane, Madison Heights, MI., grandchildren, Lia Kieren, Rochester N.Y., Andre Kieren, Memphis TN, Anne Kieren, New York. N.Y., Sean and Shea Barry Kieren, Minneapolis, MN., Diedre Iciek, Loveland, CO., Tony Kieren, New York, NY., Kellie Kieren, Grand Rapids, MI., Mara Kieren, China; and 5 great grandchildren in Memphis, TN. She is preceded in death by her husband, Roger and her sons, Mark, Gregory, Barry, Peter and Todd; and a brother, Joseph O'Dea. A memorial service will be held at 1:00pm on May 17, 2014 at St. Francis Catholic Church in Traverse City. In lieu of flowers donations may be made to the Little Traverse Conservancy "Kieren Nature Preserve" 3264 Powell Road, Harbor Springs, MI. 49740 and University of Michigan Cardiovascular Center Philanthropic Support, 1000 Oakbrook Dr., Suite 100, Ann Arbor, MI 48104-6815. Please feel free to share your thoughts and memories with Katie's family at www.reynolds-jonkhoff.com Arrangements for the family have been entrusted to Reynolds Jonkhoff Funeral Home and Cremation Services.

Traverse City - Kathleen "Katie" Kieren, 91, Traverse City, passed away peacefully at home on April 29, 2014, with her family by her side. Katie was born on July 19, 1922 in Venosta, Quebec to her parents the late Martin and Florence (Mullin)... View Obituary & Service Information

The family of Kathleen "Katie" Kieren created this Life Tributes page to make it easy to share your memories.