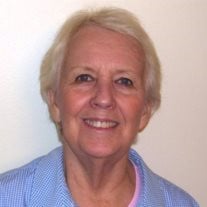 Kathlyn Gail LaCosse, 73, of Traverse City, loving wife, mother, grandmother, sister, and friend, entered the open arms of her Lord and Savior Jesus Christ on Saturday, January 11, 2014, at Munson Hospice House. Kathlyn was born on December 13, 1940, in Republic, Michigan, to the late Matt and Ailie (Heliste) Mackey, Jr. She married her husband of 53 years, Glenn LaCosse, on July 16, 1960, in Ishpeming, Michigan. Kathlyn’s faith was central to her life. She was an active member of East Bay Calvary Church where she was employed as the accounting secretary for many years. One of her greatest joys was leading women in studying the Bible. Kathlyn was devoted to spending time with her husband, children, and grandchildren, and she enjoyed oil painting. Kathlyn is survived by her husband Glenn; two sons and a daughter: Scott (Victoria) LaCosse, Kelly (Scott) Schaefer, and Pat (Carolyn) LaCosse; five grandchildren: Courtney LaCosse, Sarah, Karen, and Steven Schaefer, and Laura LaCosse. Another grandchild is expected in April. Also surviving are three sisters: Audrey (Marvin) Ruspakka, Cheryl Dionne, and Peggy (Darryl) Koschtial, as well as many nieces and nephews. Kathlyn will truly be missed by her family and friends. A funeral service honoring Kathlyn will be held at 11:00 a.m. on Thursday, January 16, 2014, at East Bay Calvary Church, 2225 Hammond Rd. E., Traverse City. Dr. Kendale Dennis will officiate. Visitation will be held at the church one hour prior to the service. Those planning an expression of sympathy may wish to consider donations to the East Bay Calvary Church Building Fund. Please feel free to share your thoughts and memories with Kathlyn’s family at www.reynolds-jonkhoff.com. The family is being served by the Reynolds-Jonkhoff Funeral Home.

The family of Kathlyn Gail LaCosse created this Life Tributes page to make it easy to share your memories.