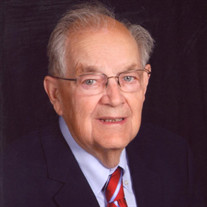 Keith J. Bunting, 83, of Traverse City, Michigan went to be with his Lord and Savior on March 30, 2015. Keith was born on December 9, 1931 in Kalamazoo, Michigan, to the late Harold J. and Elizabeth (Allen) Bunting. He met the love of his life, Mary Ann Henshaw, while working at JC Penney. Keith and Mary were married on June 21, 1957 in Kalamazoo. Together they lovingly raised three wonderful daughters in Midland, MI and later became in-laws to three incredible sons. Beginning in 1951, Keith honorably served his country in the US Coast Guard during the Korean War. After 3 years of service he continued his education at Western Michigan University earning his BBA degree with graduate studies at Emory University. Keith worked for Dow Chemical Company and retired after 25 years. His last position with Dow was as Manager of Government and Public Affairs. In 1993, Keith and Mary moved to Traverse City, where he was a devoted member of the Presbyterian Church. He embraced his faith and the power of positive thinking - the philosophy he lived by. Hunting, fishing, and boating were among his favorite hobbies. Keith and Mary loved to jump in the car and explore the area, marveling at the change of seasons. A daily pontoon boat ride around the lake with Mary by his side was a favorite way to spend a summer day. Keith was an avid football fan. There was nothing better than watching a Sunday afternoon Lions game with him; his love and enthusiasm for the game were contagious. Most importantly, Keith loved and cherished his family. He will forever remain in their hearts. Surviving Keith is his loving wife Mary of 57 years; daughters Susan (Jeffrey) Newland of Traverse City, Lisa (Edgar) Anders of Mount Dora, FL, Lori (Patrick) Leddy of Nashville, TN; grandchildren Alexandra and Allison Anders, Michael Leddy, John and James Newland; his loving sister, Caroline "Kay" Decker, sister-in-law Heloise Bunting, and many cherished nieces, nephews, and dear friends. Keith was preceded in death by his parents and siblings, Betty French, Harold "Allen" Bunting, and Mary Lou Mann. Friends and family may gather for a time of visitation on Saturday, April 11th from 10 to 11am at the Presbyterian Church, 701 Westminster Road, Traverse City, Michigan 49686. A memorial service will begin at 11am. There will be a luncheon at the church immediately following the memorial service. Keith's family sincerely thanks Hospice of Michigan and the caring staff at Cherry Hill Haven Lodge, especially Nancy Chester and asks that memorial contributions be directed to the Presbyterian Church or the Alzheimer's Association (Research), Michigan Great Lakes Chapter, 564 S. Main St., Suite 200, Ann Arbor, MI 48104. Please share your memories, stories and thoughts of Keith with his family by way of his online guestbook at www.reynolds-jonkhoff.com. The family is being served by Reynolds-Jonkoff Funeral Home and Cremation Services.

Keith J. Bunting, 83, of Traverse City, Michigan went to be with his Lord and Savior on March 30, 2015. Keith was born on December 9, 1931 in Kalamazoo, Michigan, to the late Harold J. and Elizabeth (Allen) Bunting. He met the love of his... View Obituary & Service Information

The family of Keith J. Bunting created this Life Tributes page to make it easy to share your memories.

Keith J. Bunting, 83, of Traverse City, Michigan went to be with...