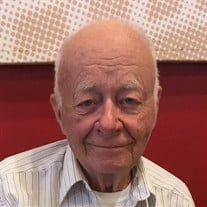 Cedar – Keith Edward Parker, 88, of Cedar, Michigan passed away May 2, 2019 at Munson Medical Center in Traverse City, Michigan. Keith was born on October 14, 1930 in Traverse City, the third son of Howard and Esther (Loeffler) Parker. Keith grew up near Cedar, Michigan. He attended the one room school house in Solon through 8th grade and was in the final class to do so before it closed. He then moved on to Traverse City High School from where he graduated in 1948. While in high school, he was assigned a locker with Margaret Ellen Bernhardt, who was to become the love of his life. In February of 1952, Keith was drafted into the United States Army. He served on the front lines in the Korean Conflict and was honorably discharged in November of 1953. During Keith’s time in Korea, he received the Commendation Ribbon with Medal Pendant, the United Nations Service Medal, the Combat Infantry Badge, the Korean Service Medal with three Bronze Service Stars, and the National Defense Service Medal. His time serving in Korea weighed heavily on him throughout his life, but in the last few years, he passed on many memories of his time there to his family. One of the many significant memories for Keith was when his company provided protection for President-Elect General Eisenhower during his visit to Korea. Another was when the armistice went into effect and the incessant firing ended and he then heard the sound of crickets chirping there for the first time. On March 13, 1954 Keith married Margaret at the Wesleyan Methodist Church in Traverse City, Michigan. They lovingly built a home on the Parker family farm, where they lived all of their married life. Keith was an active member of Bayview Wesleyan Church, serving in leadership on the church board. He was most recently affiliated with the First Church of the Nazarene. Keith worked for the Traverse City State Hospital, while also working on the family livestock and crop farm.He retired from the hospital in 1984 as the supervisor of the power plant and grounds. After that retirement, he devoted himself to working full time on the farm. Keith appreciated nature and was a faithful steward of the land. He passed on his love of the land to his children, especially to his son Wes, who farmed in partnership with him for more than 40 years. Keith found great satisfaction in operating equipment and planting and harvesting crops. He enjoyed going to auctions and farm equipment stores and always relished making and getting a good deal. Keith was steadfastly true to his family and friends. He spent countless hours with Margaret at her care facility prior to her passing in 2017 and also with his mother prior to her death. He could always be counted on to give his time and assistance to those in need. He will be missed and continue to be loved by his children Phyllis (Morrie) Walworth of Sault Ste. Marie, MI; Dave Parker of Cedar, MI; Brenda Parker of Warren, MI; Wes Parker of Cedar, MI; Carol (Todd) Sears of Bethel, VT; and Tim (Chris) Parker of Pearl City, HI; grandchildren Jeff (Sarah) Norris, Karen (Brent) Michals, Lisa (Ray) Golladay, Mary (Nick) Huyck, Becky (Nick) Splan, Marina (Brad) Bisdorf, Alexander Sears, Ben Sears, Ethan Sears, and Matthew Parker, seventeen great-grandchildren; sister-in-law Pat Wiegert and brother-in-law Victor(Bonnie) Bernhardt; and many nieces, nephews, extended family, and friends. Keith was preceded in death by Margaret, his beloved wife of 63 years, whom he sorely missed. He was also predeceased by his parents, and brothers Paul and Ralph. Visitation will be held on Tuesday, May 7th, 2019 from 5 to 7 pm at the First Church of the Nazarene, 1023 S. Division Street, Traverse City, Michigan 49684. Also at the church, the funeral service honoring and celebrating Keith's life will take place at 12 noon on Wednesday, May 8th, 2019. There will also be visitation one hour prior to the service. Pastor Rick Rice will officiate. A luncheon will follow the service at the church prior to interment at Solon Township Cemetery, Cedar where Keith will receive full military honors. Memorial contributions may be directed to the First Church of the Nazarene. Please visit www.reynolds-jonkhoff.com to share your condolences and memories with the family. The family is being cared for by Reynolds Jonkhoff Funeral Home.

The family of Keith Edward Parker created this Life Tributes page to make it easy to share your memories.