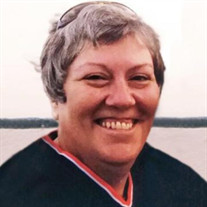 Kendra Ann Gagnon, 65 of Traverse City passed away Monday, January 18, 2021. Kendra was born on June 7, 1955 in Saginaw, Michigan, the daughter of Hector Joseph Gagnon Jr and Lola Grace (Cantley) Gagnon. Kendra was six-years-old when she and her two older brothers, Karl and Kerry, lost their mother, Lola. But her father met and married Beulah Chapple, whom Kendra loved as a parent, and the family happily doubled in size to include Kendra’s step-siblings Terri Chapple, Lauren Chapple, and Michael Chapple. She attended high school in Saginaw and, afterward, worked for a time in that city and then in Flint. But before long Kendra was drawn to Northern Michigan, where several of her siblings had settled. She cherished the idea of being close to her family and, in keeping with a theme that endured, Kendra built a life in Traverse City that she centered around those she loved. She began work as a secretary at the downtown law firm then known as Running, Wise, and Wilson. There, in the early 1980s—whether Kendra realized it at the time or not—she discovered a professional passion, and a circle of colleagues, that she would adore for nearly three decades. Kendra loved her work and the role it allowed her to play in the life of the firm and in our community. But she loved nothing quite as much as her family. And as her grateful nieces and nephews grew up, they were blessed to have their Aunt Kendra as an attentive and supportive fixture at birthday parties, at graduations, and at ballgames, cheering from the sidelines. With her pride, and her presence, and her exuberant joy, Kendra made others feel the effortless warmth of her affection. Kendra was a careful follower of sports and an undeterrable fan of the Detroit teams, particularly the Tigers—despite their frequent attempts to test her devotion. She enjoyed with special enthusiasm her trips to football games at Michigan Stadium and to NASCAR races, often with her brother Kerry in Tennessee. She enjoyed country music and was a voracious reader. The stacks of hardcover books that at one point filled her home included, among others, everything Stephen King had written; she loved a compelling story. She was quick to laugh, and when she did, it was a big and happy sort of laugh. The kind that made others need to smile, too. Kendra involved herself. She paid attention. She checked in. She sent warm emails and she clipped the Record-Eagle when she found in the paper some good news about somebody she loved. She adored dogs, including, for many years, her beautiful black lab named Sadie. Those who wish to honor her memory might consider making a donation to the Cherryland Humane Society. In addition to many nieces, nephews, great-nieces, and great-nephews, Kendra is survived by her siblings: Karl (Linda) Gagnon, Kerry (Dawn) Gagnon, Terri Streeter, Lauren (Patte) Chapple, and Michael Chapple. She is preceded in death by her parents, Hector, Lola, and her stepmother, Beulah, and sister-in-law Cathy Chapple. For keeping Kendra comfortable in her last days, and for easing the difficulties brought about by the current pandemic, her family offers heartfelt gratitude to the staff at Medilodge of Traverse City. It was there, on Monday, that Kendra passed. Just after noon, a favorite song had been played for her and a small tear dampened her eye. Outside her window, in the courtyard where she liked to feed the ducks, the sun had begun to shine on new snow. As Kendra’s hand was being held, her breathing began to slow and she departed as she had lived: with grace, and in the presence of family. Visitation will be held for Kendra on Friday, January 22, 2021 from 1-2 p.m. at the Reynolds-Jonkhoff Funeral Home. A memorial service will be held at 2 p.m. also at the funeral home followed by a procession to the Grand Traverse Memorial Gardens. For those wishing to attend online please visit www.rjfh.tv Kindly share thoughts and memories with Kendra’s family at www.reynolds-jonkhoff.com.

Kendra Ann Gagnon, 65 of Traverse City passed away Monday, January 18, 2021. Kendra was born on June 7, 1955 in Saginaw, Michigan, the daughter of Hector Joseph Gagnon Jr and Lola Grace (Cantley) Gagnon. Kendra was six-years-old when she and... View Obituary & Service Information

The family of Kendra Ann Gagnon created this Life Tributes page to make it easy to share your memories.