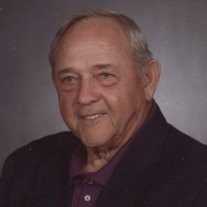 Kingsley-Kenneth Eugene "Ken" Berry, 83, of Kingsley, died with his family by his side, Wednesday morning, November 27, 2013, at Munson Medical Center. Kenneth was born, January 27, 1930 to parents Willard and Ethel (Tompkins) Berry at Old Mission. He graduated from Elk Rapids High School, and was a star athlete and Captain of three team sports. Upon graduation, he enlisted in the U.S. Navy and served in the Atlantic Fleet as an aviation structural body mechanic, and is a veteran of The Korean Conflict. Ken married Therese Fasel in 1955. Together they raised four daughters on the family farm. Therese preceded Ken in death in 1997. Ken enjoyed High School Sports and was an avid Basketball fan. He coached for several years at St. Marys' of Hannah, and especially loved watching his daughters and grandchildren play sports. He was always a farmer at heart and raised beef cattle and had a great love of horses, and his John Deer tractor. He was very active in 4-H community events, Hannah chicken dinners, and was a lifetime member of the Northwest Michigan Fair. Ken also enjoyed playing cards and singing Karaoke with his family. He owned and operated several gas service stations in Traverse City and later worked for 20 years as head grounds supervisor for NMC until his retirement. Ken married Kathleen Marie Arnold Baase on January 12, 2001 and the couple lived in Kingsley. "To know Ken was to love Ken", he was well known and loved in many circles of the community. He was a gracious, good-hearted man, and always the gentleman, he lived with dignity and he died with dignity. He will be missed. Ken is preceded in death by his parents; a wife; sisters; Eleanor Clouse, and Edith Cooper, brothers; Willard, Dave, and Frank Berry. He is survived by his wife; Kathleen, sister; Mary Lou (Marilu) Belanger, daughters; Janice Bernardini (Ed) Rogin, JoEllen Berry Murchie (Paul) Kluth, Jean (Tim) Whiteford, Jackie Berry (Steve) Schenk, stepdaughters; Sue (Dick) Simon, Pam (Dale) Benton, Patty Baase (Tony) Harris, Grandchildren; Tim and Patrick Schmeltzer, Eric Murchie, Bill Whiteford, Lyndsey Beeman, Logan, Lexie, Loran and Lacey Benton, Kyle Harris, Great-grandchildren; Damien, Hayden, Hannah, Donna Grace, Trinity, Collins, Gauge, Grace and Stella. Visitation will be held on December 2, 2013, from 4:00pm to 7:00pm at the Reynolds-Jonkhoff Funeral Home. Funeral Services will be held on December 3, 2013 at 10:30am at the Reynolds-Jonkhoff Funeral Home. In lieu of flowers memorial donations may be made to the Father Fred Foundation. Please share your memories of Ken with the family at www.reynolds-jonkhoff.com Arrangements for the family have been entrusted to Reynolds-Jonkhoff Funeral Home and Cremation Services.

The family of Kenneth E. Berry created this Life Tributes page to make it easy to share your memories.