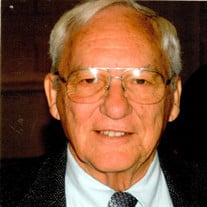 Dick Stevens of Traverse City fittingly went to be with the Lord on Christmas Day in 2021 at the age of 92. He was born on April 23, 1929, to J.H. Stevens (John/Jack) and Angie Wormbrandt Stevens from Muskegon, Michigan. After studying Architecture at U of M and serving in the U.S. Navy as a Sea Bee (Construction Battalion) in 1954, Dick joined the family business. In 1956, he married Edna Sprik and the couple had three children, Lori (Nick) Lierman, Chuck (Rhonda) Stevens, and Dale Stevens. The family settled in Traverse City where for 30 years Dick made his first career in Stevens Oil Company (a Northern Michigan Texaco Products Distributor) with his father, his brother (Jack), and Jack’s family (Marva, Ron, Dan and Dave). Throughout this career Dick also served as an Elder and on numerous boards at Faith Reformed Church as well as several community boards including Traverse Area Regional Planning Commission. After his first retirement, he was instrumental in the genesis of the local Christian radio station, WLJN and Good News Media, Inc. During this time, Dick joined R. Whiting Associates as a real estate fee appraiser for many years and served on several real estate review boards. Upon his second retirement, Dick and Edna spent 15 years traveling around the country during winters serving with RVIC’s (Roving Volunteers in Christ’s Service), while spending summers with their grandchildren creating indescribable and unforgettable RV caravan camping trips. Time in between, he enjoyed development, design and construction. He also enjoyed rebuilding vintage cars and trucks with his family. Family members who now cherish his memories and legacy include Edna, his loving wife of 65 years, his three children, his grandchildren (Angie (Brian) Galietti, Kyle Stevens, Sarah Stevens, and Trevor Stevens), and two great grandchildren (Enzo Galietti and Dante Galietti). A memorial service will be held at Faith Reformed Church, 1139 E. Front Street, Traverse City, MI 49686 on Saturday, January 8, 2022 at 11:00 A.M. The family will receive friends at the church prior to the service at 10:00 A.M. In lieu of flowers, memorial contributions may be made to Faith Reformed Church and / or Good News Media, Inc. P.O. Box 1408, Traverse City MI 49685-1480. Please feel free to share your thoughts and memories with Dicks family at his tribute page at www.reynolds-jonkhoff.com. The family is being cared for by the Reynolds-Jonkhoff Funeral Home and Cremation Services.

Dick Stevens of Traverse City fittingly went to be with the Lord on Christmas Day in 2021 at the age of 92. He was born on April 23, 1929, to J.H. Stevens (John/Jack) and Angie Wormbrandt Stevens from Muskegon, Michigan. After studying Architecture... View Obituary & Service Information

The family of Kenneth "Dick" Richard Stevens created this Life Tributes page to make it easy to share your memories.

Dick Stevens of Traverse City fittingly went to be with the Lord...