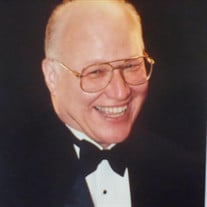 Kenneth “Ken” B. Harris, 81, of Traverse City passed away peacefully on Sunday, February 20, 2022 at the Grand Traverse Pavilions. Ken was born on August 22, 1940 in Wyandotte, MI to the late Buford "Jack" and Laura (Pierce) Harris. He married the love of his life Catherine “Kathy” Elizabeth Hawlik on September 10, 1960 in Royal Oak, MI. He was always by her side and her protector. Honorably, Ken served our Country in the United States Marine Corps as a Corporal from 1958-1961. He was always very proud of his service in the Corps. Ken was a wonderful father who led by example and filled his girls with the sense that they could do anything. He was always up for playing ball, coaching, and attending track meets, volleyball/softball games, school plays and awards banquets. He showed his girls how to love fiercely, stand tall, be honest and always offer a firm handshake and a smile to all those who came into their lives. Ken worked for the Postal Service for 35 years in escalating levels of responsibility. First as Chief Accountant in Southfield, then an interim appointment as Postmaster in Plymouth and then an appointment as Postmaster for the Farmington and Farmington Hills, MI area. After retirement he and Kathy moved up to the Traverse City area. Ken was a member of the Traverse City Elks Lodge #323 and always enjoyed his time at the Lodge, especially during the Blue Angels Air show over the Bay during the Cherry Festival. In his spare time he enjoyed bowling, where he bowled two perfect 300 games in 2010 and 2011; softball on traveling leagues and always took his family along to cities all over the state attending tournaments, hitting home runs and even winning a state championship along the way. He was a faithful Lions fan. He loved to feed his "critters" who visited their home in the woods, and at one point had a pet Turkey, Tommy. Ken will fondly be remembered for his infectious smile and beautiful blue eyes. He will be deeply missed by all who knew and loved him. Surviving Ken is his wife Kathy of 61 wonderful years, daughters Kimberly (Kenneth) Freeman and Kelly (Michael) Fitzpatrick, grandchildren, Jackson, Rileigh, Andy and Janie. Ken is preceded in death by his parents and daughter Kandi Lynn. Visitation for Ken will be held from 4-7pm on Thursday, February 24, 2022 at the Reynolds-Jonkhoff Funeral Home. Funeral services for Ken will also be held at the Funeral Home at 11am on Friday, February 25 with a visitation beginning at 10am. Burial will take place at Oakwood Cemetery with full military honors. Memorial contributions in Ken’s honor may be directed to our Local Alzheimer’s Association – Greater Michigan Chapter 921 W. 11th Street Traverse City, MI 49684. Kindly share thoughts and memories with Ken’s family at www.reynolds-jonkhoff.com.

The family of Kenneth B. Harris created this Life Tributes page to make it easy to share your memories.

Kenneth “Ken” B. Harris, 81, of Traverse City passed away peacefully...