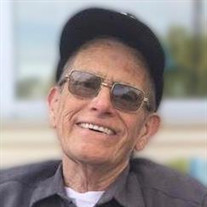 Kenneth ‘Ken/ KT” Tondreau, 77, of Maple City, died June 18, 2018 with loving family by his side. Ken was the 4th of 7 children born to Joseph and Catherine (Frederick) Tondreau in Detroit on August 13, 1940. Ken has lived in the area for 43 years, moving up from Livonia after receiving a job in the post office. He was a member of the St. Rita/Joseph Catholic Church, Cedar Chamber of Commerce where he helped to found the Cedar Polka Festival, K of C, and the Lions Club. Ken enjoyed gardening, and was known for his tomatoes, zucchini and famous pumpkin patch. As a proud Vietnam veteran, his service inspired his son and 7 of grandchildren as well as many extended family members and friends to follow in his footsteps. Ken was known for his work ethic and strong family values, that were passed on to his family and inspired in friends. If you knew Ken, then everything was made lighter with his wit and “dad jokes”. Knowing Ken made you a better person. Ken is survived and missed dearly by his beloved wife Carol of 56 years, his children; Keith (Venus), Denise (John), Kurt (Carol) and Elizabeth (Stacy). He is also survived and missed dearly by 17 grandchildren and their spouses, and many great grandchildren; Brothers Alfred (MaryAnn) and Leo, sisters, Ann and Gail, as well as sister in laws Esther, Marilyn and many extended family members and special friends. He is preceded in death by both his parents, his son Kenny, and his brothers Joe and John. A visitation will take place Friday June 22, 2018 from 5-7 pm at St. Rita’s Church in Maple City with a prayer service beginning at 7pm. A Mass of Christian Burial will take place Saturday June 23, 2018 at 12:00 with visitation one hour prior also at the church. Father Cureton will be officiating. Ken’s final resting place will be at the St. Rita Cemetery. In Lieu of flowers, the family would like you to consider memorial contributions to the Cowell Cancer Center in honor of Ken. Please visit www.reynolds-jonkhoff.com to share your memories and condolences with the family on Ken’s Tribute page. The family is being cared for and served by the Reynolds-Jonkhoff Funeral Home and Cremation Services.

The family of Kenneth Tondreau created this Life Tributes page to make it easy to share your memories.