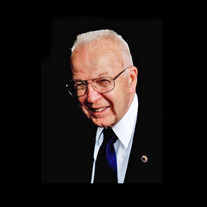 Born in Grand Rapids, Michigan, Ken was raised in Mayfield, Michigan, in the era of horse and buggy transportation. He died in Traverse City, Michigan, in modern times where he signed himself into Hospice care using his finger on a cell phone. In between he lived a life full of love, service, education, work, flight and dance. A graduate of Kingsley High School, Ken served as a welder and band member in the Army Air Corps during World War II from 1942 to 1946. He married his high school sweetheart Kathleen Vincent in Flint, Michigan, on June 10, 1944. After the war, Ken returned to his life passion for education, earning a B.S. in Chemistry from Michigan State University, a M.S. in Chemistry from the University of Minnesota, and a Ph.D. in Organic Chemistry from the University of Michigan. In 1956 he and Kathleen moved to Ashland, Ohio, where Ken built the research laboratory for Hess & Clark, a veterinary medicine company. In 1966 he was hired by Parke Davis Company as superintendent of the production facility in Holland, Michigan. In 1976 he and Kathleen incorporated their own company in South Haven, Michigan; Wyckoff Chemical Company made the active ingredients pharmaceutical companies used to make medicines. When Ken retired from his company, he and Kathleen relocated to Traverse City, Michigan, where Ken earned his real estate license and served as president of the local Board of Realtors. As a member of the Kiwanis Club of Traverse City he had 35 years of perfect attendance during which he served in several officer positions and led sales teams for the annual radio auction fundraiser. While in Holland, Ken earned his pilot’s license and often flew himself between Holland and Detroit to attend Parke Davis meetings. After Kathleen died in 1996, Ken pursued his dream of learning to soar and enjoyed afternoons flying light gliders at Frankfort Airport. He also joined long-time friend Nancy Hubbell for square dance classes; they married on September 25, 1999, and together danced their way from Alaska to the Caribbean. Ken was preceded in death by his parents, Norval and Opal (Halladay) Wyckoff; siblings Ruth, Gerald, and James; wife of 52 years Kathleen; and son-by-marriage John Luchini. He is survived by his wife of 21 years Nancy Hubbell Wyckoff; daughters Tamara Wyckoff Luchini and Teresa Wyckoff Szur; son-by-marriage James Szur; grandchildren and great-grandchildren Dirk and Kathleen Colbry (Tamara, Grace, John, Kenneth), Mark and Dolly Luchini (Andrew, Alexander, Aurora, Amelia), Nan Luchini and fiancé De’Andre Nixon (Nevaeh), Timothy Luchini, and Frank Luchini; and Nancy’s children Peter and Karen Wertanen, Laurie Miller, and Brian Hubbell. Son, brother, husband, father, grandfather, and great-grandfather (“More Grandpa”), Ken spent his life gift of 97 ½ years as a man who cherished his family, respected his co-workers, and faithfully served the God he believed in. Public visitation will be held from 4-7 pm on May 14th at Reynolds-Jonkhoff Funeral Home, 305 Sixth St., Traverse City, MI 49684. Masks and social distancing guidelines will be required. There will be a prayer service at 6:30 pm which may be viewed at www.rjfh.tv. Click on Ken's photo to connect to the livestream. Family will gather for a private interment ceremony in St. John’s Cemetery, Fenton, Michigan on May 15th. Memorial gifts may be sent to Kiwanis of Traverse City (PO Box 864, Traverse City MI 49685). Please share your memories of Ken and thoughts with the family by visiting Ken's tribute page at www.reynolds-jonkhoff.com.

Born in Grand Rapids, Michigan, Ken was raised in Mayfield, Michigan, in the era of horse and buggy transportation. He died in Traverse City, Michigan, in modern times where he signed himself into Hospice care using his finger on a cell phone.... View Obituary & Service Information

The family of Kenneth Keith Wyckoff PhD created this Life Tributes page to make it easy to share your memories.