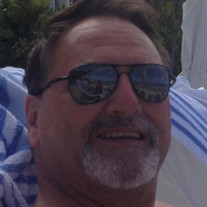 Kevin Ross Hooper, 64, of Traverse City, passed away on March 12, 2020, while on a work assignment in Mount Pleasant. He was born January 20, 1956, in Traverse City to Beth (Duff) and Walter J. Hooper, Jr., and he spent his formative years growing up on Old Mission Peninsula and attending Traverse City Public Schools. Kevin loved his work. He was one of the founding partners and the “technical brain” behind Compass Communications Group (CCG). Established in Traverse City in 2002, the group is devoted to providing wireless call systems to skilled nursing and assisted living facilities throughout the state. Kevin thrived in the sunshine and near water. In his younger years, he enjoyed fishing on his boat named “Hoopla.” He loved mushroom hunting in the spring and gardening in the summer, whether it be flowers or bushes or trees. He loved music, both spinning discs and hearing it live, and his taste was eclectic: classic rock, blues, jazz, and for country music, he enjoyed the occasional Willie Nelson concert. Kevin loved to cook and took his passion to a new level in the mid-80s, when he opened his restaurant named “Hoops,” on Union Street. There he made the best banana walnut pancakes on the face of the earth. At home, he reveled in seeing others enjoy his cooking at the many gatherings he and his wife, Susan, hosted. Among his favorites were the “orphan” dinner parties he organized for friends who couldn’t be with their own families for the holidays. Kevin knew how to cook for a lot of people. People will remember Kevin for his dry sense of humor, his antics with his brother Jeremy, his story-telling, his generosity, his cooking, his love for his dogs. His good friend, Sam Abood, will remember him for the many John Wayne movie marathons they watched together over the years. But mostly people will remember his huge heart. Underneath it all, Kevin was a teddy bear, a gentle giant. Kevin will be dearly missed by his loving wife, Susan (Parshall) Hooper, brother Jay (Marie) Hooper, sisters Candy (Tom) Bensley and Sheree (Wayne) Clewis, nieces Heather (Scott) Jaworski, Bailey (Brenden) Booth, Kelsey Bensley, Nikki Clewis, nephew Joel Clewis, and eight great nieces and nephews. On Susan’s side, he is survived by her father, James (Carole) Parshall, D.O., David Parshall, Nancy (Dave Bedford) Parshall, Dan Parshall, and Doug (Paula) Parshall. His Newfoundlands Gertie, Gus, and especially Bear will miss him terribly. He was pre-deceased by his parents, brother Jeremy, Susan’s mother, Joanne Kline, and many well-loved dogs including Nicky, Maddy, Rocky, Elvis, Ozzy, and Bella. Memorial contributions in Kevin’s name may be directed to the elderly dog rescue, Silver Muzzle Cottage, 3785 Rice Road NW, Rapid City, Michigan, 49676 Kevin’s body will be cremated. The family thanks Reynolds-Jonkhoff Funeral Home for their care. A Celebration of Kevin’s Life will be held on August 22, 2020 from 3pm – 6pm. The Gathering will be at the Warren’s Barn – 10859 Center Rd – 6 miles out on Old Mission Peninsula. The Barn & Yard Tents will provide a Great Outdoor Setting with Plenty of Space for Everyone to Feel Comfortable Sharing Memories, Stories, and Laughter in Remembrance of Kevin and how he touched our lives! Please join us in Celebrating the Life & Times of Kevin Hooper!

Kevin Ross Hooper, 64, of Traverse City, passed away on March 12, 2020, while on a work assignment in Mount Pleasant. He was born January 20, 1956, in Traverse City to Beth (Duff) and Walter J. Hooper, Jr., and he spent his formative years... View Obituary & Service Information

The family of Kevin R. Hooper created this Life Tributes page to make it easy to share your memories.

Kevin Ross Hooper, 64, of Traverse City, passed away on March...