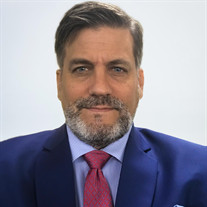 CAPT Kirk Hornburg, USN Our beloved, CAPT Kirk Hornburg, United States Navy, age 56, was taken from us too early on January 11, 2020, in Saudi Arabia. After three years of working abroad, while making preparations to return home permanently to his wife and family in Traverse City, Michigan, he suffered a sudden and massive heart attack. Kirk was born November 30, 1963 in Hilton, NY. After graduating from Hilton High School in 1981, he was accepted into the Naval ROTC program at the University of Michigan. He graduated in 1986 with degrees in German, History, and Economics along with a newfound passion for U of M football. More significantly, as a sophomore, he found the love of his life, Linda, introducing himself in the cafeteria of Markley dorm on a dare. Kirk was commissioned into the United States Navy upon graduation in May 1986 as a Surface Warfare Officer, and was assigned to the USS John A Moore out of Long Beach, CA. Kirk and Linda were secretly married October 16, 1987, days before Kirk’s ship was deployed into combat in the Persian Gulf for 6 months. On December 30, 1988, Kirk and Linda were married in front of family and friends in Detroit, Michigan. Kirk was later stationed in Stuttgart, Germany for 4 years, where together with Linda, he witnessed firsthand the end of the Cold War and the reunification of Germany, ski raced for the United States Military Ski Team, and earned a Master’s Degree in International Relations from Boston University. In 1993, Kirk was stationed in Riga, Latvia, as part of a Military Liaison team tasked with aiding the newly independent nation. He and Linda, working in the US Embassy, enjoyed this time as one of their greatest adventures together. Between military meetings over home-brewed vodka, harassing hungover Russian officers sleeping in their trucks, and “accidentally” snapping pictures of a Soviet nuclear submarine base (the photos were never returned by the US intelligence officer…) there was never a dull moment. Getting to work alongside Linda, they helped to coordinate the visit of President Clinton, with Kirk ultimately helping to write the speech delivered during that first visit by a US President to the freshly sovereign nation. The adventures continued when Kirk was later stationed in England, where his first son, Kalvis, was born in 1995. To be able to spend more time with his young family, Kirk transferred to the Navy Reserves, and moved back to Michigan. He earned yet another degree, this time a law degree from Wayne State University in Detroit. 1997 brought more joy with the birth of his son Lars, a national championship for his Wolverines, and a Stanley Cup for the Red Wings. After briefly working as a lawyer in Detroit, he felt the draw of the lake and of beautiful Northern Michigan, and took a job as the executive director of MTEC in Traverse City, Michigan. Two years after celebrating the birth of his favorite daughter Kaija in 2002, he was recalled into the Navy and worked overseas at US European Command and at the Naval Operations Center in the Pentagon for 2 years. He continued to work as a civilian and Naval Reserve Officer in Washington DC until 2016, commuting back to his home in Traverse City. He retired from the Navy after 30 years of service in June 2016 having achieved the rank of Captain. In September 2016 he went to work as a consultant in Saudi Arabia with Booz Allen Hamilton. Kirk’s wife and children were his greatest joy. He loved to ski and passed on this love to his kids, who have all been alpine racers. He was a certified alpine coach and official, coached whenever he could, spent countless hours waxing skis, and volunteered at nearly every race. In addition, he assisted in coaching his kids’ soccer teams, and his passion was always evident from the sidelines. He also loved swimming, hiking, canoeing, snorkeling, biking, camping, doing triathlons, and basically enjoying the outdoors in every way possible. He felt happiest and most at peace swimming in Lake Michigan at nearby Haserot Beach. He had an intense zest for life, loved to cook and enjoy good food, write poetry, and was a voracious reader. His curiosity, fantastic intelligence, and near constant booming laughter were appreciated by all he met. His final moments were spent on FaceTime with his very beloved wife, Linda, while in loving banter about his imminent return to the US and his reunion with her and his adored daughter Kaija after many years abroad. We’ll miss his immensely entertaining and diverse stories, positive attitude, unflappable humor, gregariousness, eloquence, and most of all his heartfelt bear hugs. He is survived by loving wife Linda, children Kalvis, Lars and Kaija, and in-laws. He will be interred this spring in Arlington National Cemetery. A Funeral Service for Kirk will take place at 3:00 pm on Saturday, January 25, 2020 at the Reynolds-Jonkhoff Funeral Home with a visitation for family and friends beginning at 2:00 pm. Kirk will be laid to rest at Arlington National Cemetery at a later date. Kirk’s service will be broadcasted live at www.rjfh.tv for anyone that would like to watch the service where internet is available. In lieu of flowers the family asks that memorial contributions be directed to 22 Until None, 18402 N 19th Ave., Box 370, Phoenix, AZ 85023; or to Hornburg Children’s Education Fund, c/o Linda Vitins, 305 Sixth Street, Traverse City, MI 49684.

The family of Kirk Hornburg created this Life Tributes page to make it easy to share your memories.