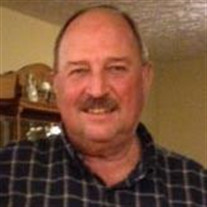 GRAWN — Larry Benedict Fleis, 67 of Grawn, passed away after a long battle with stage-4 cancer Monday, Dec. 22, 2014 at Munson Medical Center surrounded by his loving family. Larry was born on Jan. 7, 1947 in Detroit, to the late Benedict Stanley and Yvonne Marie (Omnès) Fleis. In 1950, the family returned up north and settled at the Kingsley farm where he spent his youth. During this time, he learned to work on automobiles and the values of hard-work, farmer ingenuity, common sense and caring for those in need. After a three-month courtship, on July 5, 1968, he married his one true love, Marilyn Adelaide Lark. They spent the next 46 years devoted to one another and lovingly raised four ambitious and talented children. Larry loved to work. His proudest work accomplishments were four. He served 29 years with the Traverse City Police Department – the last 15 years as Captain. With his father-in-law, Charlie Lark, he founded Lark Lawn & Garden in a garage. Under his 40 years of leadership, the family-run business incorporated and became two stores. Marilyn, with her family, will continue to grow the business into the future. Also, he collected and “tinkered” with his vast collection of unique, antique cars. Because of his life-long love of animals, he and Marilyn have a small hobby farm for pleasure and food. Additionally, he served the local community with great dedication on many committees as Blair Township Trustee from 2000-2006 and 2012-current and Grand Traverse County Commissioner 2007-12. Integrity and working to defend the rights of the common man were highly valued by Larry. When Larry wasn’t working, he enjoyed family gatherings and travelling with his children and grandchildren. With Marilyn by his side, he liked to frequent antique car shows, swap meets and historical landmarks. His greatest hobby was his cars, especially his Hudsons and his ’59 Ford retractable hardtop. Also, Larry loved to visit and to host his French family, and to share his many skills and vast knowledge with others. Surviving Larry are his dedicated wife Marilyn, their children, Benedict “Nino” (Cheer) Fleis, Dr. Charles “Paulie” Fleis, Annette “Peanut” (Harvey) Houghton, and Suzique “Bruise” (Tony) Couture; grandchildren Alexandra, Peter, Joel, Emily, Seth, Trenton, Grant, Noah, Stephen, Clark and Adelina; sister, Monique (Kneale) Brownson, brother, Marc (Jane) Fleis, brother-in-law Joe Morgan, half-brother, Stanley (Marcie) Fleis; a coming great-grandson and a grand dog, Sophie; also many other loving family members and friends. Larry is preceded in death by his parents, sister Jackie Morgan and grandson Nicolas Couture. The family would like to thank the staff at Munson Medical Center and Reynolds-Jonkhoff Funeral Home for their compassionate care. Visitation will be held for Larry from 1-3 and 5-8 at the Reynolds-Jonkhoff Funeral Home on Sunday, Dec. 28, 2014 with a story sharing time beginning at 5 p.m. A Mass of Christian Burial will take place at 11 a.m. on Monday, Dec. 29, 2014 at St. Mary’s of Hannah Catholic Church in Hannah with a visitation held from 10-11 a.m. Fr. Anthony Cureton will serve as celebrant. Immediately following, a burial will take place at St. Mary’s of Hannah Cemetery. In lieu of flowers memorial contributions may be directed for Mass Intentions, or to the Salvation Army or the Cowell Family Cancer Center in Traverse City. The family is being served by the Reynolds-Jonkhoff Funeral Home www.reynolds-jonkhoff.com.

GRAWN &#8212; Larry Benedict Fleis, 67 of Grawn, passed away after a long battle with stage-4 cancer Monday, Dec. 22, 2014 at Munson Medical Center surrounded by his loving family. Larry was born on Jan. 7, 1947 in Detroit, to the late Benedict... View Obituary & Service Information

The family of Larry Benedict Fleis created this Life Tributes page to make it easy to share your memories.

GRAWN — Larry Benedict Fleis, 67 of Grawn, passed away after...