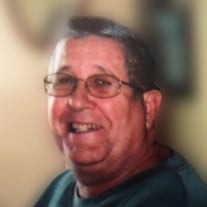 Larry Lee Hyliard, 80, of Traverse City, passed away January 28, 2020 surrounded by family. Larry was born October 23, 1939 to the late Lloyd and Bernice (Taylor) Hyliard in Horton, MI. After graduating from Concord High School in 1958 where he played football, Larry immediately enlisted in the United States Army and began his 20-year career serving our Country with pride. His tours while enlisted included; Germany, Iran, Taiwan and Vietnam. On December 13, 1975 he married Nancy Curry in Traverse City. After retiring from the Army on February 28, 1979, he managed Meadow Lane Mobile Home Park for 25 years. Larry loved many things; playing Euchre with his wife and brother-in-law every Friday evening and doing weekly lunch dates with his buddies at local places. He and Nancy also enjoyed regular evenings out to dinner, especially Outback Steak House. When Larry wasn’t playing cards, hanging with his pals or dating his wife, he could likely be found watching his beloved Detroit Tigers or some NFL. Larry cared deeply for all people and made it a point to sincerely check in and ask how they were doing. His capacity to love was larger than life and he will be greatly missed. Larry is survived and missed dearly by his wife Nancy, his daughter Tammie (Ben) Marvin, son Brian (Renee`) Hyliard, sister Darlene Hall “Bitsy”, card playing Bro’s Ron and Wayne, sister in law Kathy Hall, grandchildren; Joshua, Jeff, Amanda and Devon, 12 great grand children and many extended family members and friends. He is preceded in death by his parents, his brother Ron, his nephew Britt Center as well as his furry sidekick Teiki. Visitation will take place Sunday February 2, 2020 at the Reynolds Jonkhoff Funeral Home from 1:00-2:30pm. Proper Military Honors for Larry will be given at 2:30pm. Please visit www.reynolds-jonkhoff.com to share your memories with the family on Larry’s tribute page. Those wishing an expression of sympathy may do so in Larry’s honor to the VFW Post #2780 or to the Cherryland Humane Society. Larry and his family are being cared for by the Reynolds Jonkhoff Funeral Home and Cremation Services.

Larry Lee Hyliard, 80, of Traverse City, passed away January 28, 2020 surrounded by family. Larry was born October 23, 1939 to the late Lloyd and Bernice (Taylor) Hyliard in Horton, MI. After graduating from Concord High School in 1958 where... View Obituary & Service Information

The family of Larry Hyliard created this Life Tributes page to make it easy to share your memories.