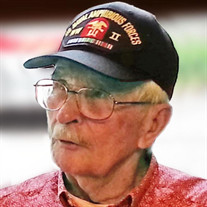 Leonard "Larry" Lampton, 96, a true American hero and member of the greatest generation, died peacefully on November 18, 2020. Larry was born on June 26, 1924 in Louisville, KY to the late Leonard Emmet and Gladys (Allen) Lampton. Larry served our country honorably as a member of the United States Navy from January 13, 1943 to February 25, 1946. He served aboard the USLCF-31 on D-Day at Omaha Beach and he spoke very honestly about his experiences. He carried around a picture in his wallet of the boat and on the back was inscribed "Appledorf Scotland, 33 ft tide. Left us high and dry". He was one of the few members of the point to survive and was awarded the purple heart. He often remarked that he was just a scared kid doing his job. In later years he spoke publicly to veterans groups and for fundraisers. One of the highlights of his life was attending the honor flight to Washington D.C. with fellow veterans. On May 16, 1947 Larry married Elaine Virgina Etter in Centerline. Together they celebrated 72 years of marriage before she passed in January of 2020. Larry was a Conductor for the Chesapeake and Ohio Railroad for over thirty years. Larry enjoyed fishing, hunting and playing tennis. He could often be found on the tennis court and enjoyed the game well into his 80's. When he was 85, he won the southwest senior Olympics in Phoenix. He was also never one to turn down a game of poker, especially if it was Texas Hold'em. He won many tournaments in the area and continued to play almost until the day he died. He and Elaine also liked to twirl around the square dance floor for many years. They were great partners in every sense of the word. They were also both avid readers. Larry often shared that his secret to longevity was 2 PBR's before dinner every day and a few pieces of cantaloupe every morning. Larry will be greatly missed by his sons Mickey (Paula Pancheri) Lampton and Timothy (Mary Jo) Lampton; grandchildren Lawrence, Jerry, Lindsey (Wes Harrand), Jon, and Jessica; great-grandchildren, Elana and Brady; and sister Martha White. He was preceded in death by his parents, wife, and siblings Barbara and Lela. In keeping with Larry's wishes, cremation has been arranged and private services will be held. Interment for Larry and Elaine will take place at a later date at Arlington National Cemetery. Those wishing to make a gift of remembrance in Larry's name are asked to consider Hospice of Michigan or to Mid Michigan Honor Flight. The family would like to offer their sincere thanks to both French Manor on La Franier and Hospice of Michigan for their care and kindness and his poker friends for all the fun times. One of the last things Larry said was that he was "All In". He is now receiving the greatest jackpot and is reunited with his dear Elaine.

The family of Larry Lampton created this Life Tributes page to make it easy to share your memories.