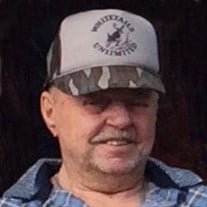 Larry Ivan Moore, 72, passed away on November 27, 2015. Born at Fife Lake, he served in the US Army as a sharpshooter and heavy duty truck driver. After military service, he returned to Northern Michigan, met his beloved wife, Tari, and in 51 years together, they raised four children, as well as nine dogs and two ponies. Over his lifetime, Larry was a truck driver, electronics technician, avid hunter, dedicated father, and huggable grandfather. He could drive any vehicle, be it a huge truck, snowmobile, fishing boat, or purple Water Buffalo motorcycle. He could also fix most anything including engines, appliances, and the human heart. His loved ones frequently asked him for guidance, and while his first response was usually, “It’s only going to get worse…” this was quickly followed by, “and then it will get better.” Larry believed in Johnny Cash’s words, “Life is rough, so you gotta be tough.” But Larry’s idea of “tough” was not what you might think. He taught his children to be themselves, be sensitive to other people’s feelings, and do what is right even if it is difficult. Those around him felt his warm strength, easy humor, and kindness. His bright blue eyes looked people directly in the eye, and he accepted everyone just as they are. Larry’s favorite thing to do was jump in the truck with his wife and dogs, play Merle Haggard on the radio, eat slices of pickled bologna, and drive far down an unnamed two-track road. Out there in harmony with nature, he knew that “not all those who wander are lost.” His life was lived in rustic simplicity with no need for more than is necessary, as that was more than enough. Larry is survived by his wife, Tari; four children, Dave (wife Betsy), Barb (husband Al), Laurie (husband Jon), and Chris (partner Carrie); honorary daughter, Carol; fifteen grandchildren; seven great grandchildren and one on the way; and his many cousins and dear friends. He was preceded in death by his parents, Ivan and Janet Moore, and his grandson, Jack. Funeral services for Larry will be held at 11am on Wednesday, December 2, 2015 at the Reynolds-Jonkhoff Funeral Home with a visitation beginning at 10am. In lieu of gifts, please send donations to the Cherryland Humane Society or Disabled American Veterans (DAV Chapter 38). Kindly share thoughts and memories of Larry at www.reynolds-jonkhoff.com. The family is being cared for by the Reynolds-Jonkhoff Funeral Home.

Larry Ivan Moore, 72, passed away on November 27, 2015. Born at Fife Lake, he served in the US Army as a sharpshooter and heavy duty truck driver. After military service, he returned to Northern Michigan, met his beloved wife, Tari, and in... View Obituary & Service Information

The family of Larry Ivan Moore created this Life Tributes page to make it easy to share your memories.