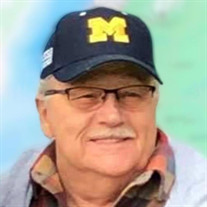 Larry William O’Mara, 78, of Traverse City, passed away peacefully at his home, with his fiancé, Janice, by his side, on Monday, September 14th, 2020. He was born on May 23, 1942 to Helen (Sarrach) and William O’Mara, in Detroit. He grew up in Royal Oak and graduated from Dondero high school in 1960. Larry remained in the Royal Oak/Troy area where he was a self-employed carpenter, granite installer and marble finisher. Before returning to Clinton Township, he was also a volunteer firefighter for the city of Troy. Larry was very proud of his sobriety of 43 years and became a mentor and wonderful role model to many. He believed in the Second Amendment, enjoying his gun collection. He also loved riding and taking trips on his Harley Davidson. In 2016, he moved to Cedar to be with his elementary school “first love“, Janice. He became a member of West side community Church and loved the beauty of Leelanau County and surrounding areas. He was a little rough around the edges at times but had a beautiful heart and a strong moral compass. Larry’s unwavering faith was by far his biggest accomplishment and helped keep him grounded, especially through his illness. Larry is survived by his Fiancé, Janice McCormack ; sisters, Karen Ledford of Hernondo, Florida and Judy (Mike Sauer) Rawski of Harsens Island; brother, Mike (Debbie) O’Mara of Scottsdale, Arizona; daughter, Kimberlee McCarrick of Grand Blanc; stepson, Steve (Bonnie) Berg of Erie, Colorado; grandchildren, Jerry (Chrissy) Gignac, Rikki (Amanda) Gignac, Crystal (Derrick) Fiorini and Ron Berg; great grandchildren, Thomas, Dakota, Aurora, Jazmyn and Scarlett, along with many friends, especially Matt and Judy. He is preceded in death by his parents, wives Judy and Diane, and his granddaughter, Meghan. A service to celebrate Larry’s life will be held at a later date, due to Covid restrictions, at Immanuel Lutheran Church in Macomb Michigan. His family has asked that he be remembered through donations to Cowell Cancer Center, 217 S. Madison Street, Traverse City, MI 49684 or St. Jude’s.

The family of Larry William O'Mara created this Life Tributes page to make it easy to share your memories.