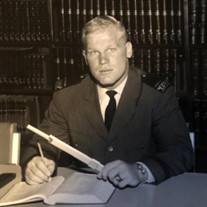 Larry Carl Tollstam, 78, of Traverse City passed away August 4th, 2021, at Culver Meadows Assisted Living. He was born on September 10, 1942, in Chicago to the late Oscar Morritz and Doris (Strandberg) Tollstam. Larry was an incredible student athlete in his early years, playing both baseball and football at a high level in Saginaw and Lansing. The United States Air Force Academy recruited Larry as a catcher for the baseball team. However, when he arrived on campus, they asked him to split time between both sports. That move paid off in one special game when Larry was named the Associated Press “Linemen of the Week” for 18 solo tackles and was credited for 10 assists in leading the Air Force over the Washington Huskies. That record stood for over 40 years. He was highly decorated, before eventually leaving to graduate from Michigan State University. On March 7, 1970, Larry married his best friend, Margo Lynn Geyer in Milwaukee, WI. They celebrated their 51st wedding anniversary this year. After graduation, Larry joined Owens-Illinois and would spend 29 years with one company. He ascended quickly to Vice President, General Manager. “During the most challenging period in history, the prescription products business attained unparalleled achievements under your leadership” wrote Joseph H. Lemieux, Chairman and CEO of O-I. However, his greatest achievement was being called the “Gentleman” by all his colleagues. The qualities of genuine personal interest and concern were well documented. In his free time, Larry enjoyed Fly Fishing, tying flies, and traveling to different rivers. He was a founding member of the North Branch Boys. His other best friend and brother Thomas (preceded in death) shared this passion, and they could be found on the North Branch of the AuSable River every chance they got. Larry is survived by his wife Margo; their children Trey Tollstam (Crystal) of Whitehouse, Ohio, Britny Tollstam of Traverse City, Michigan, Ashley Burill (Ryon) of Gaylord, Michigan; grandchildren Geyer, Liam, Brice, Asa, Sterling, Max, Olivia, Alex and Brittany. The family will celebrate his life privately. Memorial contributions in his honor may be directed to the Anglers of the AuSable. https://www.ausableanglers.org/giving-programs/donations/make-a-donation/#!form/Donate Anglers of the Au Sable PO Box 200 Grayling, MI 49738

Larry Carl Tollstam, 78, of Traverse City passed away August 4th, 2021, at Culver Meadows Assisted Living. He was born on September 10, 1942, in Chicago to the late Oscar Morritz and Doris (Strandberg) Tollstam. Larry was an incredible student... View Obituary & Service Information

The family of Larry Carl Tollstam created this Life Tributes page to make it easy to share your memories.