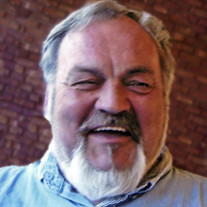 On Friday, September 6, 2019, Larry Lee Way, 68, of Traverse City, Michigan, was welcomed home into the arms of his Heavenly Father. He was born on May 17, 1951 at Osteopathic Hospital of Traverse City, Michigan to Clyde and Margot (Gee) Way of Williamsburg, Michigan. He was the sixth out of his siblings. He grew up in Williamsburg, attended school at Elk Rapids, Michigan, graduating in 1969. On August 27, 2005, he married Toni Marlene Le’Mere in Rapid City, Michigan at the original Way family homestead. He is survived by his wife Toni, son Sean (Nicole) and grandson Hunter, sister Myrna (Way) and John Dykhuis, brothers George (Diana), Maurice “Mo” (Lynda), Marvin and Kenneth, stepson Tom Peebles (Lou Howard), stepdaughter Nicole “Nikki” (Chance) Evans, many nieces and nephews, as well as several step grandchildren. He was preceded in death by his parents, brother Gordon, nephews Chris and Reece, his former wife Bonnie L. Way, a close friend Richard “Rick” A. Peebles and many friends he made along the way in his journey in life. Larry was a worker, employed at Hahnenberg Moving and Storage for 15 years then becoming a cross country trucker for 28+ years working for various trucking companies hauling different products including vehicles, cargo trailers, and mail. He also worked for Egler Company in Williamsburg, Michigan. Out of the 50 states, Larry trucked in 46 states (all except Alaska, Hawaii, Washington and Oregon) logging over 6 million miles. His hobbies included hunting, fishing, dancing, reading, swimming, motorcycles, flying, golfing, playing his keyboard, search-a-word puzzles, watching his favorite television shows, but what was most important to his heart was spending quality time with family and friends. His favorite restaurant was Big Boy for the food but especially for the coffee. He also had coffee with his buddies at McDonald’s in Kalkaska on Monday mornings. Larry was a very positive and upbeat person, no matter what. Larry was a Christian who prayed every day. His favorite expressions were, “he/she is a good egg”, “where there’s a will, there’s a way, and my name is Larry Lee Way”, and most of all, “God’s always got my back”. He had a contagious laugh. A celebration of life will take place at the Reynolds Jonkhoff Funeral Home, 305 Sixth Street, Traverse City, Michigan, on Friday, September 20, 2019. Visitation will be at 10 a.m. with the service at 11 a.m. The Rev. Clifford Batterbee of Mancelona will officiate. A luncheon will follow at 1 p.m. at V.F.W. Cherryland Post 2780 at 3400 Veteran’s Drive, Traverse City, Michigan. Family suggests memorials be directed to your choice of charity. Burial will be in Memorial Gardens on Veteran’s Drive in Traverse City.

The family of Larry Lee Way created this Life Tributes page to make it easy to share your memories.