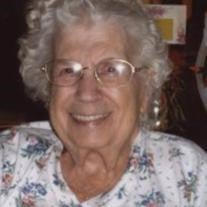 Laura Elaine Owen, 91, a resident of Traverse City for the past 86 years, passed away Saturday, July 7, 2012 at Bortz Health Care in Traverse City. Laura was born on Friday, October 22, 1920 to the late Thorpe and Beatrice (Rhoades) Throop in Vestaburg. In 1942, she entered into marriage with Russell L Owen in Traverse City. He preceded her in death on 1990. During her working years, Laura had been a seamstress at The Fit Trouser Company on Woodmere. She then worked for Munson Medical Center as a dietician. Laura was a member of First Christian Church and the East Side Ladies Club. During World War II, Laura helped in the war effort by working in an assembly plant in Flint with her sister Alma. She enjoyed playing bingo, bowling and crafts, especially sewing, knitting and crocheting. Laura is survived by her children, Russell A. Owen of Grawn, Gwen E. Barker of Traverse City, Michael D. Owen of Phoenix, AZ and Patrice D. Smith of Newbern, TN. She is also survived by 7 grandchldren and 10 great grandchildren. Laura's siblings Alma (Gene) Reid of Florida and Cedar, Sid Throop of Traverse City and a sister in law, Jane Throop of Traverse City, also survive. She was preceded in death by her parents and her siblings, Angie Hull, Volney, Frank, and Bill Throop. Visitation for Laura will take place beginning at 11 a. m. Wednesday, July 11at the Reynolds-Jonkhoff Funeral Home. Funeral services will begin at 12 noon Wednesday, also at the funeral home with Pastor Brett Spalding officiating. Burial will be in Grand Traverse Memorial Gardens. The family would ask that in lieu of flowers, memorial contributions in Laura's name be directed to The Bortz Health Care Activity Fund or to Hospice of Michigan. You are invited to share your memories and photos of Laura by way of her online tribute page and guest book at www.reynolds-jonkhoff.com.

Laura Elaine Owen, 91, a resident of Traverse City for the past 86 years, passed away Saturday, July 7, 2012 at Bortz Health Care in Traverse City. Laura was born on Friday, October 22, 1920 to the late Thorpe and Beatrice (Rhoades) Throop... View Obituary & Service Information

The family of Mrs. Laura E. Owen created this Life Tributes page to make it easy to share your memories.

Laura Elaine Owen, 91, a resident of Traverse City for the past...