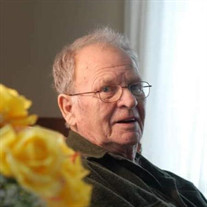 Lawrence K. Brink, 90, of Traverse City, beloved father, grandfather, great grandfather, great great grandfather, brother, uncle, and friend passed from this life to the next on December 14, 2017. Although his family is sad to see him go, all was settled with him and his God - and frankly, he missed his beloved Freda, with whom he has been re-united. Larry was born in Tampa Florida, the son of Ernest Kent and Cleo Barbara (Robinson) Brink. Following high school, he earned his degree in forestry from Stephen F. Austin University in Nacogdoches, TX. Larry served our country as a member of the U. S. Army from 1944 until 1946 and then served in the Army Reserves until 1962, being discharged as a First Lieutenant. He married Freda Ann Michael on January 23, 1947 in Huntsville, TX. A resident of Traverse City since 1978, Larry and Freda had resided in Lincoln, Nebraska, Texas, and Manistee. He was a member of Kensington Church, served on the board of the Pregnancy Resource Center, and enjoyed fishing and hunting. Larry was a professional forester, but in his heart he was a “logger”. His children said “Daddy never saw a tree he didn’t want to cut down!” There were jokes about being born with a chainsaw attached to his arm. He was also a generous lover of people and spent his life nurturing many friendships. Larry is survived by his children Rebecca (Dennis) Currington of Sand Springs, OK, Nanette (William) Anderson of Colorado Springs, CO, Cleo Elece (Ronald) Hollis of Boynton, OK, Michael Fred Brink of Wilmington, North Carolina, William Alan Brink of Traverse City, JoNell (Todd) Hafer of Oregon, Editha Ann (Steve) Bammesberger of Colorado Springs, CO, Darrell E. Brink of Wilmington, North Carolina.; 32 grandchildren, 36 great grandchildren and a great great granddaughter. He is also survived by a sister, Mary (Don) Blakely of Grayling and his brother Eugene Kent Brink of Colorado Springs, CO. Larry was preceded in death by his parents, his wife, Freda; a son Lawrence Kent Brink, and his sister, Barbara June Grossmann. Visitation for Larry will be held from 6 until 8 p.m. Monday, December 18 at the Reynolds-Jonkhoff Funeral Home. The memorial service will take place at Kensington Church with the graveside service at Idewild Cemetery near Kent City. Both will be held in the spring of 2018, with time and date to be announced later. At Larry’s request, memorial contributions should be directed to The Pregnancy Resource Center, 121 S. Garfield Ave., Ste C, Traverse City, MI 49686

The family of Lawrence K. Brink created this Life Tributes page to make it easy to share your memories.