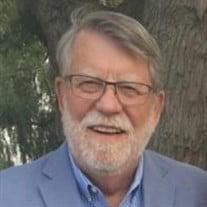 Lawrence Frederick Kennedy Jr. Larry Kennedy left this world peacefully on October 10th, secure in the knowledge that his beloved Wolverines were 6-0. Facing multiple cancers, Larry met each challenge full-throttle-game on. Larry’s fidelity to family, friends and career were the highlights of his life in addition to his loyalty to his alma mater. As the oldest of five children, Larry’s early life was focused on sports and academics. He played basketball (very tall man) and baseball (at U of M too) as well as scoring the Branstrom Award for academic excellence his freshman year at U of M. His family life included his wife of 30 years, Vicki, his son, Jeffrey and step-children Ryan and Lindsey. He adored his kids, attending every event they participated in throughout their school years. Their only complaints had to do with the Jimmy Buffett soundtrack that seemed to always be on repeat. Banking was Larry’s career choice following his BS in Administration from University of Michigan. He thoroughly enjoyed what he did and was an excellent problem-solver and negotiator. His nearly 40-year career with Empire/Huntington Bank and Traverse City State Bank was fulfilling. The analytical aspects of assisting commercial customers combined with the camaraderie with other team players were the hallmarks of his tenure. Larry loved a challenge and the opportunity to succeed making everyone satisfied. For recreating, Larry had a boat addiction. First it was sail boats and then motor boats- anything to be out on the water. He took a break mid-college to sail in the Caribbean and never quite got over that experience; living on East Bay with a boat out front was his cup of tea. We’d be remiss if we didn’t mention high school friends dubbed ‘the Grove City Pickers’ who played pick-up basketball in the Detroit area. This crew remained friends and gathered for reunions, proudly wearing their hats: Vintage 1946. Larry leaves behind his wife, Vicki, son Jeffrey (Melissa) Kennedy, step-children Ryan Preuett and Lindsey Kennedy, in addition to Becky (Rod) Lindoo. Grandchildren are Logan, Brooklyn and Aspen and step-grandchildren Michael, Max and Jonathan in addition to many nieces and nephews. Surviving siblings include Susan Stangland, Alice (Michael) Maun and William (Sheila) Kennedy. Predeceasing Larry were his parents, Lawrence F. Kennedy Sr. and Beverly Foster Kennedy; his brother Bruce and sister-in-law Denise Kennedy; a step-son Ben Howell; a brother-in-law Chris Stangland; in-laws, William and Thelma Gallagher and sister-in-law, Sherry Day. Memorials may be directed to Moffitt Cancer Center in Tampa (www.give.moffitt.org) or to the Inland Seas (https://schoolship.org/donate/) A memorial gathering will be held on Wednesday, October 20, 2021 from 3 – 5 pm at the Traverse City Country Club.

The family of Lawrence Frederick Kennedy Jr. created this Life Tributes page to make it easy to share your memories.