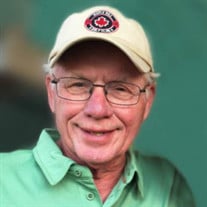 Lawrence Francis Lamie, 76, of Saginaw, MI celebrated life from June 26, 1944 to February 6, 2021. He was a beloved and devoted husband, father, grandfather, brother and friend, born in Muskegon, MI to the late Meda and Gertrude (Popa) Lamie of Traverse City. He believed the greatest gift his parents gave him was his faith. He lived most of his life in the Saginaw area and retired from GM after 31 years. Larry was a member of St. Dominic Catholic Church. He also devoted many hours at Maple Hill and Swan Creek Golf Clubs and always said that “He excelled at being a very good hacker!” There wasn’t a day, weather permitting, that Larry wasn’t on the golf course. One year he played 160 rounds and kept track of every one! Larry married his wife of 25 years, Michele (McDonnell) Thompson, on February 2, 1996 who survives him. He said to her many times that “She was his guiding light, shining star and hope of the future.” Also surviving are his son, Steven (Stacey) Lamie of Traverse City, Jennifer (Terry) O’Donnell of Durham, NC, stepsons Bryan (Chelsea) Thompson of Calumet, Mark Thompson of Kalamazoo, 7 Grandchildren, Dexter Lamie, Riley (Merissa) Lamie, Elliott Lamie, Annie Lamie, Kaitlyn O’Donnell, Abby O’Donnell, and Axel Thompson. He also leaves a brother, Robert (Sharon) Lamie and two sisters, Carol (Roger) Rose and Judy (Jim) Niemuth and also many nieces and nephews. He was predeceased by his niece, Jackie Niemuth. Larry would like all to know that he hasn’t met one father, mother, son, daughter, nephew, niece, aunt, uncle or cousin that he did not love. “Thanks for being part of my family!” If you want to honor Larry’s memory: Take a walk outside, preferably on a green, enjoy the view on Wayne Hill in Traverse City or go for a ride listening to Elvis Presley and never pass up an opportunity for an ice cream cone! A Mass will be celebrated in his honor at 11am on Monday June 28, 2021 at Immaculate Conception Catholic Church. The family has asked that memorial contributions be made to Juvenile Diabetes Association of America. Due to COVID 19 a celebration of life will occur in the summer of 2021 in Traverse City, MI. As Larry would say “Rock, Roll and Remember!” Please feel free to share your thoughts and memories with Larry’s family at his tribute page at www.reynolds-jonkhoff.com. The family is being cared for by the Reynolds-Jonkhoff Funeral Home and Cremation Services.

Lawrence Francis Lamie, 76, of Saginaw, MI celebrated life from June 26, 1944 to February 6, 2021. He was a beloved and devoted husband, father, grandfather, brother and friend, born in Muskegon, MI to the late Meda and Gertrude (Popa) Lamie... View Obituary & Service Information

The family of Lawrence "Larry" F. Lamie created this Life Tributes page to make it easy to share your memories.