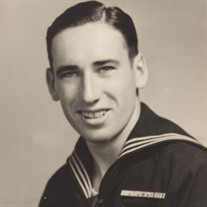 Lawrence Stephen McQueen December 26, 1923 - August 18, 2019 Larry was born in Oak Park, IL. He was the second of six children born to Mary and Thomas McQueen, the second of five sons. He grew up in Hillside IL, in a close knit, family neighborhood. As a teen, he spent his summers caddying at Butler National Country Club and Medina Country Club and the rest of his life as an avid golfer. In 2012 Larry was surprised with a trip to the Masters where he had the opportunity to see his favorite players and experience matches first hand as part of the gallery. In 1941, Larry enlisted in the Navy as Seaman Third class, serving our country in the Pacific and Atlantic theaters and the Alleutian Islands, sailing on the USS Endicott, USS Pennsylvania, USS Thompson and the USS Kalkaskia. Three of his brothers also enlisted and served. All of the McQueen boys returned safely home at the close of WWII. Larry was deeply patriotic and was honored to participate on a Talons Out "Honor Flight" to Washington, DC on September 27, 2014. In early 1944 Larry attended a USO dance in New York City and met the beautiful woman who would become his wife of 65 years, the love of his life, Gloria Irizarry. They were wed on October 7, 1944. Two children were born to them Carolann (1946) and Lawrence (1958). After serving in the Navy, Larry was employed by the US Postal Service, working for 30 years before his retirement. During that time, he and Gloria enjoyed league bowling with friends and family vacations in Wisconsin and Florida. After retirement, they enjoyed fishing and puttering around on their pontoon boat, competing in a daily Scrabble matches, watching baseball games and golf matches. They loved getting family together for dinner where there was always good food, cold beer and lot of laughs. Larry deeply loved his children, grandchildren and great grandchildren and was adored by them, too. Everyone who met him appreciated his quick wit, sparkling eyes and sense of humor. His experiences during the war had shaped him into a man who appreciated the precious gift of life, family and friends. He was preceded in death by his wife, Gloria and son Larry. He is survived by his daughter Carolann (Fred) and was "GG Larry" to his grandchildren, Robert (Cindy), Douglas (Jen), Eric, Christina (Dom), Karen (Al) and Kat (Roger) and his great grandchildren, Adam, Ian, Morgan, Sofia and Sam. A private funeral mass will be celebrated at St. Patrick Church and internment with full military honors at Grand Traverse Memorial Gardens Traverse City. Please feel free to share your thoughts and memories with Larry’s family at his tribute page at www.reynolds-jonkhoff.com. The family is being cared for by the Reynolds-Jonkhoff Funeral Home and Cremation Services.

Lawrence Stephen McQueen December 26, 1923 - August 18, 2019 Larry was born in Oak Park, IL. He was the second of six children born to Mary and Thomas McQueen, the second of five sons. He grew up in Hillside IL, in a close knit, family neighborhood.... View Obituary & Service Information

The family of Lawrence Stephen McQueen created this Life Tributes page to make it easy to share your memories.