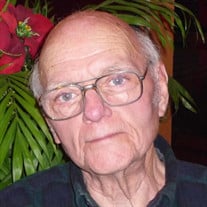 Sutton, Lennox Jack passed away on January 26, 2021 at the Grand Traverse Pavilions in Traverse City, Michigan. Jack was born on September 18, 1927 to Jesse and Aleta (Shekell) Sutton and was raised in Northville, Michigan. He served in the U.S. Army and was stationed in Panama. On July 27, 1951, he married Mary Ann Ayers and they moved to Bay City, Michigan where they raised four children. Jack worked in a variety of jobs including partnering with his dad to develop the Floral Gardens Cemetery. He retired from Consumers Energy, then launched a second career as a landscaper/groundskeeper at the Chestnut Hill Benevolent Association in Massachusetts for 10 years before he and Mary Ann returned to Michigan. For the next 15 years, he had a lawn care business in Midland, Michigan and permanently retired when he was 88 years old when he and Mary Ann moved to Interlochen, Michigan to be near family. In addition to being a wonderful husband and father, Jack was also a man of many talents. He was a master gardener and created glorious yards - both personal and for others. He had a beautiful singing voice and was a member of the Boston Men’s Glee Club, Midland’s Men of Music and served as a church soloist on occasion. He made exquisite Christmas wreaths, flower arrangements and then began creating cement mushrooms as yard ornaments, which he gave away to friends and family. Finally, Jack had a terrific sense of humor and a quick wit, which kept everyone smiling. He leaves behind his beloved wife Mary Ann; children Jack (Jill) Sutton; Tim (Ruth) Sutton; Sarah Sutton (Mark Maddox) and Mary (Josh) Hollister; grandchildren Trevor Sutton; Shane Sutton; Tiffany (Jeremy) Ford; Michael Sutton; Laura Sutton; Jesse (Alisha) Colling; Faith (Dustin) Hansen; John (Heather) Hronek; Marianna Hronek and Chris Hronek; great-grandsons Silas and Elijah Colling and siblings Carol Funk, Virginia Watson and Jim Sutton. He was predeceased by his parents, eight siblings and son-in-law Jack Hronek. The family will celebrate his life in a private memorial service at a later date. Memorials may be sent to the First Church of Christ, Scientist, 336 Sixth Street, Traverse City, MI 49684.

Sutton, Lennox Jack passed away on January 26, 2021 at the Grand Traverse Pavilions in Traverse City, Michigan. Jack was born on September 18, 1927 to Jesse and Aleta (Shekell) Sutton and was raised in Northville, Michigan. He served in the... View Obituary & Service Information

The family of Lennox Jack Sutton created this Life Tributes page to make it easy to share your memories.