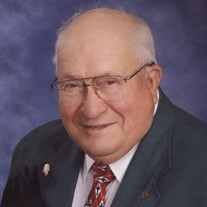 Leo Fredrick Richard, 91, of Traverse City, Michigan joined his Savior, Monday, February 15, 2021 at Munson Medical Center. Leo was born on February 12, 1930 at Lake Leelanau to the late Edmund and Clara (Eckerle) Richard. He married the love of his life, Judie Hampel on March 27, 1958 in Big Rapids, Michigan. Leo proudly served his country in the US Army as a tank driver during the Korean War. Many memories were relived when Leo and son attended the Northern Michigan Honor Flight to DC in 2018. Leo had a great work ethic starting his career as a heavy equipment operator with Boone & Boone Construction. Over the years, Leo moved his family many times, returning to Traverse City in 1963 where he became one of the original three at Elmers Crane and Dozer as a crane operator until his retirement in 1992 after over 30 years of services. Leo also helped Judie in several endeavors with JuLeo ceramics pouring and firing hundreds of those popular Christmas trees and Freidman Microwaves where he taught cooking classes to folks learning how to use those new fantageled machines. His specialties were Meat Loaf and Carmel corn. Leo had an outgoing and adventurous personality. He loved fishing, hunting mushrooms and camping. Through the years Leo and Judie traveled all around the states and Canada with many friends of Jayco International. One of his failures was trying to teach Judie how to back up that 39-foot fifth wheel with his pride and joy six speed straight stick dually truck! Being that guy that liked to cook you could find him years back at Jellystone Campground roasting 200 Chicken halves on a huge grill along with sweet corn in a garbage can! Never a weekend left him leftover chicken as it was always better than “finger licking good”. He and Judie spent many winters in Zephyrhills, Florida. Leo could talk with anyone, turning many strangers into lifelong friends. He was a faithful member of St. Michael Lutheran Church in Traverse City, Our Savior Lutheran in Zephyrhills, Florida and Trinity Lutheran Church of Traverse City where he sang in the church choir. He was a lifetime member of Cherryland V.F.W. Post #2780 and the Korean War Veterans marching in many Cherry Festival Parades. He was an avid bowler and very proud of being the “All Events Champion” in 1972 for the Northern Michigan Bowling Association. Leo is survived by his loving wife Judie of 62 years; daughter, Debi Schreiber, granddaughters; Amanda (Joe) Tranmer and Stephanie Schreiber, a son, Jeffery (Karen) Richard, grandson, Collin and a sister, Esther Hannah as well as 47 nieces and nephews and too many grands to count. He was preceded in death by his siblings Ollie, Custy, Jenny, Mary, William, Rita, Ray, Louis, Dorothy and Phil. A memorial service honoring Leo will take place at 11:00 am on Friday, May 28, 2021 with visitation starting and 9:00 am at St. Michael Lutheran Church, 915 S. Garfield Rd., Traverse City, Mi 49686. Military honors will be conducted. Those planning an expression of sympathy may wish to consider a memorial to St. Michael Lutheran Church. Please feel free to share your thoughts and memories with Leo’s family at www.reynolds-jonkhoff.com The family is being cared for by the Reynolds Jonkhoff Funeral Home and Cremation Services.

The family of Leo Fredrick Richard created this Life Tributes page to make it easy to share your memories.