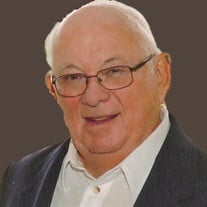 Leon Landers Martuch, 90, of Windermere, FL and Traverse City, MI passed away July 14, 2018 at Munson Medical Center surrounded by his loving family. Leon was born April 30, 1928 to Leon P. and Margaret (Landers) Martuch in Saginaw, MI. He attended Midland High School and after his graduation in 1946 he enlisted in the United States Army, serving in the 17th Regiment, 7th (Hourglass) Infantry Division. Upon completion of his military service Leon returned to Midland and attended Bay City Junior College, the University of Michigan (Bachelor of Science, Chemistry, 1952) and received his MBA from the University of Michigan in 1954. He married Shirley Ann Hartley in Bay City on August 30, 1952. In 1954, Leon joined the Dow Chemical Corporation and worked for 8 years in the Economic Evaluation office, leaving in 1962 to work with his father at Scientific Anglers. Scientific Anglers was started by his father and two of his father's friends in 1945 and was dedicated to the constant advancement and innovation of fly fishing line and tackle. In 1973, Scientific Anglers was sold to 3M and Leon joined the new ownership team as a consultant. Leon was philanthropic with his time and talents to many causes. He served on the Midland Planning Commission (1962-1967), the Midland Zoning Board of Appeals (1971-1974), and the Midland Charter Study Committee (1971-1973). He was the Charter Member of the Federation of Fly Fishermen, Director and President of Trout Unlimited, Leon P. Martuch Chapter Trout Unlimited, and Trustee and President of The American Museum of Fly Fishing. Leon was a leading figure in the fly fishing and tackle industry and his role as president of the museum will be remembered for growing the museum into something the sport and industry as a whole could be proud of. He and Shirley enjoyed summers in northern Michigan on Old Mission Peninsula and winters in Windermere, FL. He had fly fished all around the world and was most fond of those times when he was accompanied on his trips by his sons, daughter and grandson, Alan. Leon is survived by his wife of 66 years Shirley Martuch; sons Mike (Tamera) Martuch and Mark Martuch; daughter Linda Martuch; granddaughter Melanie Bayer; and grandson Alan Martuch, and great granddaughter Hazel Bayer. He was preceded in death by his parents. Those wishing an expression of sympathy are encouraged to direct contributions to the Leon P. Martuch Chapter Trout Unlimited, 5607 Woodberry Court, Midland, MI 48640 or The American Museum of Fly Fishing, P.O. Box 42, Manchester, VT 05254.

The family of Leon Landers Martuch created this Life Tributes page to make it easy to share your memories.