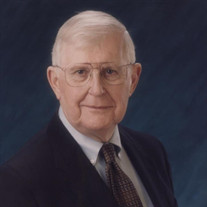 Leon B. Michael, 99, passed away Saturday, December 26, 2020 at his home in Leelanau County in the loving care of his family. He was born March 7, 1921 in Bellwood, NE to the late Edward and Anna (Schmit) Michael. After graduating high school he moved to California where he worked delivering groceries in San Francisco, served in the Civilian Conservation Corps, and began a career in banking with Bank of America in Angels Camp, CA. He joined the U.S. Marine Corps in July, 1941 and served as a 2nd Lieutenant in the 6th Division for 5 years through WWII, teaching morse code and traveling to China and Japan. Upon returning to the U.S., he completed his undergraduate degree at Western Michigan University and married Florence “Folly” (Golden) Michael on September 13, 1947. Leon then resumed his banking career as he and Folly lived in Kalamazoo, Three Rivers, and Cadillac, before moving to Traverse City, 37 years ago. He assumed the role of President of what was then called Northwestern Savings and Loan for 18 years, retiring in 1990 and continuing to serve on the Board of Directors for 21 years until the age of 90. During that time he was also an active member of the community and numerous organizations including the Knights of Columbus, the Knife and Fork Club, the Traverse City Economic Club, and the Rotary Club. He was past President of Rotary Charities of Traverse City, past Director of the Leelanau Conservancy, past Director of the Federal Home Loan Bank of Indianapolis and past Director of the Michigan League of Savings Institutions. A devout Catholic, he was also an active servant in many roles at St. Michael’s Catholic Church in Suttons Bay and later a Eucharistic Minister at Immaculate Conception Catholic Church in Traverse City. As a father he was a proud Suttons Bay Schools Band Booster and a true Norseman fan, attending many concerts, athletic games and other school events. Leon was a generous man with his time and his resources. He was friendly and well liked by everyone he met, had a sharp wit and great sense of humor, and remained a loyal fan of the Detroit Tigers and the Detroit Lions. He enjoyed vegetable gardening, traveling with Folly, and being with his family. He was preceded in death by his wife of 72 years, Florence Michael, and his 4 brothers and 4 sisters. He is survived by his children; Patrick (Laura) Michael, Edward (Ronda) Michael, Nick Michael, Charles Michael, Maggie (David) Edgar, and 5 grandchildren; Sara Michael, Isabel (Peter) Vogel, Emma Edgar, Olivia Edgar and Michael Edgar. Mass of Christian Burial will take place at Immaculate Conception Catholic Church on Monday, January 4, 2020 at 11:00 AM with a visitation beginning at 10:00 AM. Father Ben Martin will officiate. Memorial contributions may be directed to the Leelanau Conservancy, 105 First Street, Leland, MI 49654. Please share a memory with Leon’s family by visiting his tribute page at www.reynolds-jonkhoff.com. The Reynolds-Jonkhoff Funeral Home and Cremation Services is serving the family.

Leon B. Michael, 99, passed away Saturday, December 26, 2020 at his home in Leelanau County in the loving care of his family. He was born March 7, 1921 in Bellwood, NE to the late Edward and Anna (Schmit) Michael. After graduating high school... View Obituary & Service Information

The family of Leon B. Michael created this Life Tributes page to make it easy to share your memories.