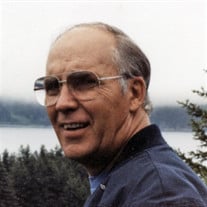 .Leon Ray Purchase, 85, of Traverse City, passed away peacefully at his home after a long illness. Leon was born in Luther, MI., on June 4, 1929, to his parents the late Bert and OnaMae (Demory) Purchase. Leon served in the U.S. Navy from 1948 - 1952. He met his sweetheart Paula Mangogna at a Navy dance on a blind date, set up by a friend while he was stationed in Boston, and they began a lifelong romance. They married on August 4, 1951, lived in Boston initially, then moved to Lansing for a short time and finally settled in Traverse City in 1962 with his young family. He retired from WTCM in 1992 after 28 years of dedicated service as an advertising executive. After retirement, he and Paula were able to enjoy many RV camping trips with friends in Michigan as well as across the country and spent many winters in their RV in Florida, Texas, and Arizona. He enjoyed 40 years of playing music with his beloved brothers, Roger and Arland in their band, “The Country Playboys.” After his brother Roger passed, he continued playing guitar with fellow musicians at the Gathering Place in Honor, where he made many new friends. He was an avid fisherman and hunter, taking many hunting trips out West and spending many days fishing locally as well as numerous fishing trips to Canada with good friends and his sons-in-law and grandsons. We are thankful for the unforgettable and precious memories. Leon also had a love for gardening, whereby he and Paula grew plenty of vegetables to share with family and friends. Family was Leon's #1 priority, and he took tremendous pride in having a close family. Most of all, he enjoyed spending time with his family, especially his grandchildren, enjoying family dinners and telling stories. He was an extraordinary, amazing story teller, entertaining his family and friends with his colorful delivery known to loved ones as "he's got Purchase". He will be dearly missed and never forgotten. We thank God for his 85 years and look forward to being with him in eternity. He is survived by his wife Paula; daughters Kathryn (Michael) Miller, Janice (Robert) Brammer; sisters Edith Purchase, Judy (Tom) Long, Arlene Beebe, Linda Benham; brothers Arland (Flo) Purchase, Elwin (Joyce) Purchase, Jack (Betty) Purchase, Dennis Purchase; grandchildren Katie Miller, Evan Miller, Hanna Brammer, Gunnar Brammer, Haley Robertson. He is preceded in death by his daughter Laura Robertson, his parents; brother Roger Purchase, sister-in-law Joyce Purchase, brother-in-law, Ray Beebe. A memorial service will be held Sat. Sept. 20, 2014 at 11:00am at the Saint Francis Catholic Church, with visitation held one hour prior at the church. In lieu of flowers please consider memorial donations to the Father Fred Foundation and the Grand Traverse Pavilions Rehabilitation Center. Please feel free to share your thoughts and memories with Leon's family by visiting www.reynolds-jonkhoff.com Arrangements for the family have been entrusted to Reynolds-Jonkhoff Funeral Home and Cremation Services.

.Leon Ray Purchase, 85, of Traverse City, passed away peacefully at his home after a long illness. Leon was born in Luther, MI., on June 4, 1929, to his parents the late Bert and OnaMae (Demory) Purchase. Leon served in the U.S. Navy from... View Obituary & Service Information

The family of Leon Ray Purchase created this Life Tributes page to make it easy to share your memories.