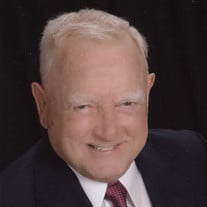 Leonard Boerma, 81, of Traverse City, passed away with family by his side on Thursday, September 8, 2017, at Munson Medical Center. Len was born on December 20, 1935 in Grand Rapids, MI, the only son of four children to the late Cecil and Jeanette Boerma (Reyers). Len spent his youth in Grand Rapids, Mi. He attended Creston High School, graduating in 1953. It was there he met the light and love of his life, Irma Roesly. They were married on August 3, 1956. Len attended the General Motors Institute, Flint, MI graduating in 1958 with a Industrial Engineering degree. Len dedicated his entire career to GM’s Lansing Car Assembly Plant, where he retired as Director of the Plant Engineering in 1994. He was very grateful for the interesting challenges and rewarding work his career gave him, as well as the very comfortable and full life he was able to provide his family. During his 23 years of retirement with Irma, Len continued to find enjoyment and challenges in building additions and improvements to their beautiful Elk Lake home, including his woodworking shop where he created many beautiful projects for his family and friends. They enjoyed traveling the world together, and he always returned inspired to create more beautiful projects in his beloved workshop for his family and friends. Len and Irma stayed active during the winter months in Florida as members of the Seven Springs Golf and Country Club enjoying golf and other fun activities with friends. Len was a member of the Northwestern Michigan Woodturners, GM Retirees Club of Northern Michigan, and Presbyterian Church of Traverse City. Len is survived by his wife, Irma; two sons, Tim (Marianna) Boerma, Dave Boerma, and daughter Linda (John) Berryman; three sisters, Marian York of Jenison, MI; Ruth VanValkenburg and Lois Telzerow, both of Grand Rapids. He is also survived by four grandchildren, Christine Boerma, Jeffrey Boerma, Tyler Berryman, and Chad Berryman; two great grandchildren, Jackson and Kaylei Boerma; as well as many nieces and nephews. Len is preceded in death by his parents, Cecil and Jeanette Boerma (Reyers). Friends are welcome to visit Len’s family on Thursday, September 14, 2017, from 5 to 7pm, at the Reynolds- Jonkhoff Funeral Home, 305 Sixth Street, Traverse City, MI., or the Presbyterian Church of Traverse City, 701 Westminster Rd., Traverse City, MI 49686 on Friday, September 15 from 1 to 2pm. The funeral service will be held at the Presbyterian Church of Traverse City on Friday, September 15, at 2pm with a meal to follow. The Rev. William Meyers will officiate the service. Those planning an expression of sympathy may wish to consider the Presbyterian Church of Traverse City or the American Heart Association. Please feel free to share your thoughts and memories with Len’s family at www.reynolds-jonkhoff.com. The family is being cared for by the Reynolds-Jonkhoff Funeral Home and Cremation Services.

Leonard Boerma, 81, of Traverse City, passed away with family by his side on Thursday, September 8, 2017, at Munson Medical Center. Len was born on December 20, 1935 in Grand Rapids, MI, the only son of four children to the late Cecil and Jeanette... View Obituary & Service Information

The family of Leonard Ralph Boerma created this Life Tributes page to make it easy to share your memories.

Leonard Boerma, 81, of Traverse City, passed away with family...