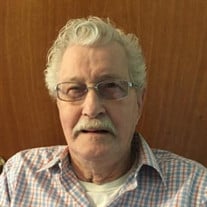 Leonard “Lefty” Steven Stachnik, 83, of Cedar passed away after a long battle with COPD at home, with his family by his side, on April, 15, 2022. Lefty was born on August 15, 1938 at his family home in Cedar to the late Steven Leonard and Helen Gertrude (Pertner) Stachnik. Lefty served our country honorably as a member of the United States Army from 1957-1965. On August 1, 1959, Leonard married Helen Jean Steinebach at St. Francis Catholic Church; Father Kohler presided. Leonard was a maintenance mechanic for Burwood Products and then Davis Electric which became Kent Power. He retired at the age of 64 and then went right back to "work" for the Cedar Chamber of Commerce managing the Cedar ball fields. This work became his passion and he was rewarded with the honor of "Lefty's FIELD OF DREAMS" in the Grub Shack. Throughout his life, Lefty loved sports. To this day, he holds many records in Leelanau County for his pitching. He played baseball, softball and blooper ball. He also loved to cheer on the Tigers, Wings and Lions. He was a member of the Cedar Chamber of Commerce, the VFW, the Eagles and was one of the original members of the Cedar Hill Toppers Snowmobile club. Lefty was quite the Euchre player; some would even call him an intense player. He will be greatly missed by his friends, family and neighbors. Those left to cherish his memory include the love of his life and best friend, his wife, Helen; their children Len (Cindy), Lorria Kalena, Ronald "Ronnie" and Daniel "Danny"; grandchildren Matthew Stachnik, Beth (Nate) Farrier, Margo Stachnik, Audra Stachnik and Brenna Stachnik; great grandchildren Lincoln and Macey Farrier and Jackson Stachnik; and his brother George (Linda) Stachnik. Visitation will be held on Wednesday, April 20, 2022 from 5 - 7 pm at St. Philip Neri in Empire. Father Ken Stachnik will officiate. The mass of Christian burial will follow on Thursday, April 21, 2022 at 11 am, with visitation beginning one hour prior also at the church. He will then receive full military honors. Graveside services will take place at a later date at Holy Rosary Cemetery in Isadore. Memorial contributions in his honor may be directed to the Cherryland Humane Society or to Cedar Fire and Rescue.

The family of Leonard "Lefty" Steven Stachnik created this Life Tributes page to make it easy to share your memories.

Leonard “Lefty” Steven Stachnik, 83, of Cedar passed away after...