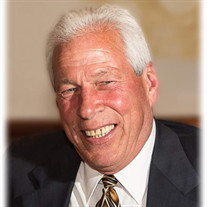 Leonard F. “Lennie” O’Brien of Northport died unexpectedly on Friday, November 27, 2020 at Munson Medical Center. He was born March 5, 1953, the second son to his parents Marvin and Arlene (Overby) O’Brien. Lennie, along with his five brothers and one sister, were raised in Traverse City’s Central Neighborhood where there was always a ballgame to be played or some “pickle” in the backyard. Lennie was an accomplished athlete at St. Francis High School and later honed his skills in the city’s fast pitch softball leagues at the old Walt Warren Field. He began his professional career at PepsiCo and was employed for several years in the beverage industry, working his way up from a route driver to a district manager for the company. Always the consummate salesman, at the time of his death was employed as a sales advisor for Serra Toyota in Traverse City. There he forged loyal relationships with scores of customers who appreciated his knowledge and expertise, and was a valued friend and mentor to many of his associates. Lennie was blessed with a quick wit and big smile. He was a man of his word and everyone knew where they stood with him. He enjoyed working in his bountiful gardens and then canning his produce. He was proud of his culinary skills and well known for his homemade salsa, and always made enough chili to share with family and friends. On September 1, 2007 he married Margo Lori - his true soulmate. They loved their fishing vacations in the Upper Peninsula and riding their Harleys together. Lennie truly loved his family; they meant the world to him. In addition to his wife Margo, he is survived by his three sons and their families. Lennie always took special pride in the academic, athletic and professional accomplishments of his boys and their families, including son Chris and his wife Jen, Tim and his wife Natalie, and Kyle and his wife Kathy. He was also beloved by his four grandchildren Michael, Olivia, Sophia and Carter. He’s also survived by his mother Arlene O’Brien, brothers Bob, Gus, Dale and Bill, and his sister Jean Livingston. He also leaves behind several special nieces and nephews. He was preceded in death by the mother of his children, Jane (Benson) O’Brien, his father Marvin, brother Alan, infant brother Gregory and brother-in-law Don Livingston. Friends are welcome to visit with Lennie’s family from 5:00 to 8:00 p.m. on Tuesday, December 1, 2020 at the Reynolds-Jonkhoff Funeral Home, 305 Sixth St. Traverse City, Michigan 49684. A Public Virtual Funeral Service will take place at 11:00 a.m. on Wednesday, December 2, 2020 at www.rjfh.tv. Memorials may be directed to Munson Medical Center’s Alcohol and Drug Treatment Center, 1105 Sixth Street, Traverse City Michigan, 49684. Please feel free to share your thoughts and memories with Lennie’s family at his tribute page at www.reynolds-jonkhoff.com. The family is being cared for by the Reynolds-Jonkhoff Funeral Home and Cremation Services.

The family of Leonard "Lennie" F. O'Brien created this Life Tributes page to make it easy to share your memories.