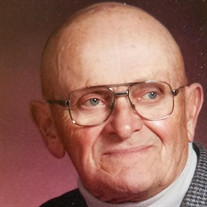 On Monday May 4, 2020, LeRoy Neil Stowe of Traverse City “finished the job, packed up his tools, and went Home”. Dad was born on August 17, 1930 to Bill and Martha (Ritola) Stowe. He spent a good part of his life living in the Suttons Bay and Traverse City areas. After graduating from Traverse City Senior High he attended Central Michigan University before deciding to join the Navy, where he served for four years. While stationed in New Brunswick, Maine he met a young lady at a New Years's Eve dance; Arline Bernice Hodgkin of Auburn, Maine. Mom fell in love with his bright blue eyes under his white Navy hat. They were married on August 29, 1954. They lived in Maine for a short time before moving to the East Lansing area where Dad continued his college education, earning a Bachelor of Science degree at Michigan State University. They had four children and decided to relocate again, this time to the familiar home of Traverse City to be near Dad's parents, siblings, and many aunts, uncles and cousins. Dad majored in Residential Building and Forest Products at MSU, and spent the rest of his working career in the construction and remodeling of homes and businesses. He also worked in the oil field industry. He was an excellent carpenter and quite particular when it came to his craft. He viewed inferior work that looked good on the outside as “a frosting job”. In his younger years, Dad enjoyed square dancing with Mom, Scouting activities with his sons, camping trips with the family, and trips to Maine to visit Mom's family. Later in life he enjoyed a good round of golf, great food and conversation, and time spent with those he loved. And sausage, cheese, pretzels and crackers. And anything butterscotch. Those closest to Dad regarded him as a decent man: responsible, independent, resourceful, selfless, frugal, and a darn good scramble partner in golf. He was a “MacGyver” kind of guy. He could make or fix just about anything he needed, and enjoyed the challenge of doing so. Necessary tools and parts always seemed to be on hand. His workshop and garage are filled with gadgets serving useful purposes, some of which, to this day, are a mystery as to what their useful purpose is. Most importantly, when we needed comfort, Dad was there with his quiet strength and reassuring words. Dad would probably be the first one to tell you he had a good life, other than the disability that plagued him in his later years. He became extremely hard of hearing, which made it hard for him to have the good conversations that he so enjoyed. It can be a very lonely and isolating way of living. His family would like to gently remind everyone that people with significant hearing loss aren't dumb, they just can't hear well. Learn how to speak to a hearing impaired person. They will love you for it. Dad was preceded in death by his wife of sixty-four years Arline, and their son Mark. Also waiting to welcome him Home, were his parents, an infant half-brother, sister Maxine, brother Don, brother Ed, sister-in-law Judy (Duane) Stowe, and brother-in-law Edward Hodgkin. He is survived by Ed's wife Jo, brothers Larry (Ila) Stowe, Duane Stowe, Jim (Victoria) Stowe, Garth (Sharon) Stowe, sister Judy (Jim) Fenton, and sister-in-law Bea Hodgkin. His surviving children are daughters Martha (Don) Sheehan and Laura (Dan) Hahn, and son Matt (Edna Sanchez) Stowe. Dad and Mom had eight grandchildren: Meg (Ben Hinks-fiance), John, and Jake Sheehan; Sage (Jamie Gavin-Smyth), Molly and Maggie Hahn; Katrina (Jeremy) Litwiller and Stephanie (Jacob) Fair. In December of 2018, Dad and Mom became the proud great-grandparents of LeRoy Fox Hahn. A memorial service is being planned for Roy on July 9, 2020 at Bethlehem Lutheran Church in Traverse City. The family is being cared for by Reynolds-Jonkhoff Funeral Home.

The family of LeRoy Neil Stowe created this Life Tributes page to make it easy to share your memories.