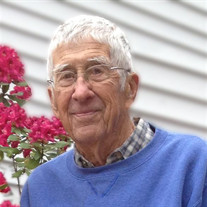 LeRoy G. "Babe" Young, 96, of Traverse City and formerly of Martin, passed away Saturday, October 22, 2016 at Munson Medical Center in Traverse City. LeRoy was born on Friday, December 19, 1919 to the late Archie and Hazel (Losure) Young in Martin. LeRoy attended Martin Public Schools. A star player for the football, basketball and baseball "Onion Kings", he graduated in 1939. Continuing his education at Western Michigan University (WMU), his studies were interrupted by WW II. A veteran serving with the Army Air Force from 1942-1945, LeRoy was discharged at the rank of Staff Sergeant. Upon returning home, he was seen frequenting the local post office where a blue-eyed blonde worked. On May 12, 1948, he married that blue-eyed blonde and the love of his life, Georgia M. Tandy in Martin. LeRoy worked at the former Miller and Boerman sporting goods store in Kalamazoo. He resumed his education at WMU, graduating in 1963 with a Bachelor of Science degree. His career was that of a teacher, having taught in the Plainwell Schools for 27 years prior to his retirement at the age of 65. LeRoy was a volunteer fireman with the Martin Fire Department. He also taught driver's education for many years in Plainwell. He was a longtime member of the Martin United Methodist Church. LeRoy and Georgia started their relocation to Traverse City by purchasing a cottage on Duck Lake in 1996, becoming permanent residents of Traverse City a few years later. LeRoy became a member of the Central United Methodist Church in Traverse City. He enjoyed woodworking - creating beautiful pieces with his scroll saw - as well as ballroom and square dancing. He enjoyed the outdoors with his gardening, bird watching and squirrel chasing. LeRoy saw humor in everything and he made friends easily. Avid travelers, LeRoy and Georgia visited Senegal, Africa to see their son who was serving with the Peace Corps. They also crisscrossed the United States numerous times visiting children and babysitting grandchildren. This past summer LeRoy and Georgia traveled to the State of Washington for a two-week visit with their son and family. LeRoy is survived by his wife of 68 years, Georgia, and their children Liz (Scott) Warren of Traverse City, Cindy (Rick) Sack of Grawn, Debbie (John) Barnoski of Centerville, OH and Tim (Tia) Young of Langley, WA. Also surviving are 10 grandchildren and 12 great grandchildren, as well as many nieces and nephews. He was pre-deceased by his parents, his sister Willo Fenner, and brothers Wylie and LaVerne Young. The family would like to offer an extra special thank you to the caring staff at Munson Medical Center. Private family services will be held at a later date; cremation has taken place. The family asks that LeRoy be remembered through contributions to Central United Methodist Church, 222 Cass Street, Traverse City, MI 49684 (www.tccentralumc.org)

The family of LeRoy G. Young created this Life Tributes page to make it easy to share your memories.